I Ain’t Scared of You: A Tribute to Bernie Mac

Posted in: No Huddle by Archive Authors on February 22nd, 2012 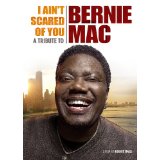 Thirty years after Bernard McCullough entered the comedy circuit by way of his hometown Chicago, I saw him on The Bernie Mac Show and laughed at his take-no-crap approach to fatherhood. You had to smile at those big truth-telling eyes always trying to convince TV land that he  would knock his TV kids upside the head if they pushed him too far. We only half-believed him but we’re glad he tried. While Bernie passed in 2008, this film tribute stories his personal life and journey up from a poor childhood in Chicago’s Southside to a thriving career in the craft he craved: making people laugh.

Rich with funny live-stage performance and film clips from Bernie’s repertoire, director Sean Long aces tribute vernacular. Long creates a communicative experience about Bernie in a way that the Mac himself might have respected, and through a framework that those closest remember him. I Ain’t Scared of You delivers a satisfying platter of honest and funny stories from his wife Rhonda, daughter Je’niece, and friends—both in and out of the public eye—from Chris Rock and Cedric the Entertainer, Samuel L. Jackson, Don Cheadle and Cameron Diaz. The list of showbiz peeps runs long from stage to the screen.

Bernie Mac was loud and colorful, and others were drawn to him. In proper form, this tribute pays tribute to what those closest loved most about Bernard McCullough: his incessant storytelling, natural hilarity and love of family. I Ain’t Scared of You recalls the title of his semi-autobiographical book published in 2001, and a gut-busting catch phrase he trademarked through his early standup routines.

Success did not come easy. Bernie made his way up through the clubs, from small-market clubs and clubs in areas that no one would go to, through competitions and variety shows. He worked odd jobs to support them as a father and husband, from General Motors to Wonder Bread. Thirteen to 14 years into their marriage, his family recalls he had a moment. In his words, “I said Rhonda, I quit today. I’ve done everything everyone always wanted me to do all my life. I’m a comedian. If I don’t do this, I’m gonna die.”

Show business. Working as a comic. Juggling marriage and making fatherhood. Getting material. A jar glass of fireflies, Long’s tribute captures and arranges telling moments from Bernie’s life and displays them so they can share themselves. The bonus features deliver longer nuggets that are also appreciated. Gotta admit, besides a few bits from his standup, films and The Bernie Mac Show, I didn’t know a lot about the man until I watched this piece. But now I want to find his old standup clips on youtube—from the 80s and 90s and laugh in retrospect.