Posted in: Disc Reviews by Michael Durr on February 23rd, 2012 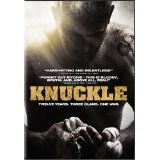 Looking over my sports dvd library, one might notice a lot of contact type titles. From Wrestling to MMA to high intensity action films, I have my fill of male testosterone fueled viewing. The question remained what would I think of some bare knuckled fist fighting in the documentary that took over ten years to make: Knuckle. Would it be simply too barbaric or would I crave more?

We see a man punching a bag held by another man with his bare fists and then the same guy sparring later on the beach. This soon prompts a scene with a police cruiser where they have to explain themselves that not only are they shooting a documentary that has lasted the last ten years but this Irish man is preparing for an upcoming fight in London. This man is simply known by the name of James Quinn McDonagh. And the credits roll.

Many years ago, Michael Quinn McDonagh got married to his cousin but while people are dancing at the reception, right around the corner is a group of men gambling. The one who most stands out is James. But James does not spend all his time grabbing a few dollars in the game of craps. He defends his family honor, he participates in the world of bare knuckle fighting. His primary enemy happens to be the Joyces, another family who participates in the sport.

We also learn about the Nevins and the sport of bare knuckle fighting. Except that it is not an organized sport anymore and fought mostly away from the eye of the local police. It just so happens that James is fighting one of the Joyces today, a man by the name of Paddy “The Lurcher”. The prize is twenty thousand pounds but more importantly, family pride is on the line. James vows to win at any cost.

The two men face off and the referees tell them the rules. There are clean breaks and there is also to be no biting and dirty play. The fight continues until one man is knocked out or decides that he can not continue. James quickly gains the upper hand in the fight but Paddy is not above pushing the rules a bit and partakes in a few dirty tactics. However, that does not keep James from winning the fight handedly. He hopes that will be the end of the fights.

But James is not above boasting on camera when the family gets back home. Apparently, this is the easiest Joyce fight he has had in his brief fighting career. But little did he know that besides the documentary director, other people were filming this little after fight discussion. Soon the tape makes it back to the Joyces and the head of the family, Big Joe Joyce is not happy. The fights will continue and this is not going to die down for a very long time.

Ian Palmer, the director of this film spent over a decade with the McDonagh clan and in such learned many lessons about what it means to fight for a family name. At times during the filming, he was not even sure he could continue. After all, when at one point we see two men who are grandfather age battling for a family name, we really have to question the barbaric nature of this affair. In some ways, I wish Ian Palmer would turn off the camera.

The fact is while they try to use the illusion of family honor, this is barbaric and quite frankly, it is a little sad. Another fact that makes this even sadder is that the families are actually related. Most of the wives also want it to stop. It is just the whole affair of men trying to defend their family name with their fists when in reality they are risking life and limb for a few pounds. Furthermore, kids are being forced into this line of defending their family so that it will continue long after Big Joe Joyce settles into the sunset.

The video is in 1.78:1 anamorphic widescreen presentation. Since this documentary was filmed over a period of ten plus years, we get a lot of varying degrees of video quality. Sometimes it is good, sometimes it is poor. We get to see a lot of different locations and that in a way was interesting to see. Also, unfortunately we get to see a lot of blood up close and personal. It does the job, but one should not expect very much.

For the audio portion, we get a 5.1 Dolby Digital Stereo track in English. The audio is also mixed, mostly on the lower end, so thankfully the people who made the film had the foresight to provide running subtitles for the entire film. Except for the narration by the director, this by the way is the hardest to decipher at times. The subtitles also miss words due to the thick Irish accents. I guess though you do not need much though when you speak through your fists.

About the only good thing to come out of this film was that James Quinn McDonagh eventually learned that defending the family name was not putting his life in danger over. However, in the same breath it does not stop him from refereeing fights between his own family and the Joyce or Nevin clan. The disc does the viewer no favors as it has mediocre video, mixed audio and no extras at all. But that actually might be a blessing in some ways as I struggle to find anything to recommend about this film. It is a rough watch from beginning to end. I like my contact sports, but even I can not condone this.

Michael Durr has been reviewing movies for the better part of fifteen years now. He primarily enjoys thrillers, sci-fi, animation and even a little courtroom drama. His favorite films include Escape from New York, the Goonies and anything with Alyssa Milano. When he’s not praising Kurt Russell as the greatest actor of our time or scratching his head over a David Lynch flick, he’s spending time at home in Texas with his lovely wife, Lori and his amazing son. How they put up with him is a mystery, but even Basil Rathbone doesn’t have the time to solve that one.
I Ain’t Scared of You: A Tribute to Bernie Mac Killing Bono