Posted in: Disc Reviews by Gino Sassani on February 22nd, 2012 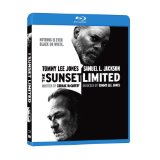 “The darker picture is always the correct one. When you read the history of the world you are reading a saga of bloodshed and greed and folly the import of which is impossible to ignore. And yet we imagine that the future will somehow be different.”

One thing that is absolutely different is HBO’s The Sunset Limited. I can assure you that this film is unlike any movie you’ve ever seen before, or are likely to see again. There are a lot of reasons for this, of course. The most glaring difference is that the film is staged and performed very much like a live stage performance. You will get the feeling almost immediately that you are watching a play rather than a movie. It’s a natural enough sensation when you consider the film has been written by Cormac McCarthy from his own stage play. The entire film takes place in a rather depressing and claustrophobic tenement apartment. The furniture is sparse and worn. The smell of poverty prevails in every inch of the small space. All of this brings us into more intimate contact with the players and enhances that feeling of watching a play.

Then there are the players themselves. The entire cast is limited to two persons for the entire running time of the film. When you consider the aforementioned confined environment and the two-man cast, you had better be getting incredibly compelling performances from your two thespians. If you’re at all familiar with the combined works of Tommy Lee Jones and Samuel L Jackson, then you don’t need me to tell you the obvious here: you’re going to get every bit a strong performance out of your small cast.

The two men have no names and are known only by the descriptive names of Professor White (Jones) and Mr. Black (Jackson). As our play unfolds the two men are sitting silently at a small kitchen table in the low-rent apartment. When they do begin to speak, we eventually learn what circumstances that have brought these until now strangers together on this rainy day. White has decided to end his life by throwing himself in front of the titular train: The Sunset Limited. Black happens to be on his way to work and catches the suicidal White in the nick of time. What follows is a philosophical discussion, often debate on such topics as the value of life, fate and God. Black is deeply religious and believes that God put him on that platform at just that time to save White. He isn’t necessarily thinking only of the man’s life, but his soul. White, on the other hand is an atheist at worst, an agnostic at best. He truly believes that life holds no wonder for him any longer, and the next logical step for him to take is off of that train platform. Throughout the conversation his hopelessness will test the faith and beliefs of his temporary savior as Black tries to keep him from leaving, for fear that he will attempt to finish the job and become, as he calls it, a terminal passenger on The Sunset Limited.

Tommy Lee Jones also serves as the film’s director, and he guides the piece flawlessly through the treacherous waters that are inherent in a film like this. Just how long can you listen to two people talk philosophy before it becomes somewhat redundant and tedious? Apparently, the answer to that question is somewhere around 91 minutes, because the film never loses the energy that is generated strictly in the words and the performances. A slower, more deliberate, a more plodding…a more compelling film you won’t find anywhere else. There is almost no score. The events play out to the sounds of the poor neighborhood which includes rain, far-off arguments, a saxophonist struggling to learn a riff, and even the haunting sounds of a nearby train… possibly The Sunset Limited itself. It’s a film that not only holds your attention with so apparently little, but it bears repeated viewings which only serve to make the entire film all the more powerful.

The Sunset Limited is presented in its original aspect ratio of 1.78:1. The 1080p image is arrived at with an AVC MPEG-4 codec at an average 20-25 mbps. While the image itself is somewhat dank and depressing, it serves as just the right setting for the conversation that follows. The set design is minimalistic, but almost everything on the screen contains some symbolic or atmospheric reason for being there. You might think that this kind of film wouldn’t require a high-definition image presentation to be effective, but it absolutely helps. The detail and sharpness all feed into crucial atmosphere. There’s no escaping the importance of what is, a very simple image on the surface.

The DTS-HD Master Audio 5.1 is nearly as powerful. Both of these actors know exactly how to deliver their lines. Their emotions might be written all over their faces in close-up and stunning sharpness. But it is the inflections and the steady rise and fall of dialog that plays out like a symphony here in the hands of these two artists. They are more musician than speaker, and the quiet sound design sets it up perfectly. Then there are those background sounds of life that tell the story of the neighborhood outside of this apartment. The presentation certainly invites you to use your senses to pay close attention to what is going on here.

There is a Commentary Track with Tommy Lee Jones, Jackson and writer McCarthy. I was hoping for a little more insight, but there is quite a bit of dead air to be found. There are some interesting thoughts to be found here, to be sure. But, it may have left me with even more questions than answers.

I’m very much looking forward to watching this one again soon at some point in the future. There are subtle things going on here that I don’t believe I’ve even yet fully realized or understood. You just can’t rent this one. You’re going to want to go back to it, so forget your Netflix queue and put this one on your permanent shelf. It will certainly get you thinking. The ending might not be as satisfying as I would have liked, but throughout it all there is this “lingering scent of divinity”.

Gino Sassani is a member of the Southeastern Film Critic's Association (SEFCA). He is a film and television critic based in Tampa, Florida. He's also the Senior Editor here at Upcomingdiscs. Gino started reviewing films in the early 1990's as a segment of his local television show Focus. He's an award-winning recording artist for Omega Records. Gino is currently working on his 8th album Merchants & Mercenaries. Gino took over Upcomingdiscs Dec 1, 2008. He works out of a home theater he calls The Reel World. Favorite films: The Godfather, The Godfather Part II, The Body Snatcher (Val Lewton film with Karloff and Lugosi, not the pod people film), Unforgiven, Gladiator, The Lion King, Jaws, Son Of Frankenstein, The Good, The Bad And The Ugly, and Monsters, Inc.
The Virginian: Fifth Season Complete I Ain’t Scared of You: A Tribute to Bernie Mac