Posted in: No Huddle by Archive Authors on February 24th, 2012 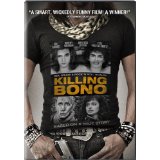 “The measure of a man is what’s left when fame falls away.”

Nobody can project the path of a bunch of teenagers swinging guitars. When Paul “Bono” Hewson launches a band with friends Larry Mullen Jr. and Dave Evans, some of his friends audition. But classmate Neil McCormick wants his own band; the latter’s younger brother Ivan makes rhythm guitar in his schoolmates’ band and Neil pulls back harder. The older McCormick acts in pride-shocked disbelief as Bonos’ music group shuttles into worldwide success and their paths exponentially diverge from what seemed the most similar beginnings into painfully contrasting ends.

U2 was wallowing well into world-fame by the time they delivered their fifth album, selling upwards of one million copies in 1987, The Joshua Tree. So too grew Neil’s obsession with former schoolboy musician Bono and their searingly contrasting successes. At least, that’s how director Nick Hamm tells it through this theatrically placed comedy, loosely based on the real McCormick’s deliciously written and received memoir, Killing Bono: I Was Bono’s Doppelganger.

It’s a movie to laugh, to entertain and to make you wonder, “Did this really happen?” Oh the easy advantages of flexible storytelling vices of memoir, comedy and ‘loosely related’ partnerships. By the end of the movie, Neil (Ben Barnes) lifts a pistol at Bono (Martin McCann) under the glimmering flash lenses of concert hall, ready to end his misery and competition. Their eyes meet, the shooter’s hand quivers and as quickly as the suspecting bodyguards can launch their flustered furrows, he’s off.

Of course, the film gravy that fills in between 14-year-old Irish childhood and matured quest for rockstardom carries much more flavor and chewy specifics. Hamm does a satisfying job of weaving comedic moments spun from the McCormick brothers’ (brother Ivan played by Robert Sheehan) real-life tragedies with dramatic delivery of a storytelling thread. He stages theatrically and  happily slipshots the ridiculous funny moments like a pro. Like when the McCormick brothers butterscape a bouncer’s beating out the backdoor of U2’s concert, and tumble right into the pistol-grip hands of their waiting mob boss’s lackey. In minutes, Hamm travels the tragic success-dodging brothers from familial feud through rock-bottom despair, through building hope under dodgy criminal darkness, into urinal-clad reunion and finally stuffing them into the trunk of a mobster’s car in ridiculous pleading unity. The characters roll out of the film recognizable versions of themselves: Ivan hopefully optimistic running after his ever-evasive dreams, Neil bossing and coaching in attempted wisdom and innate arrogance, and Bono–dear sweet Bono—as creatively supportive and mature as the day he encouraged his friends to jam out with them.

How much of the movie is true, how much is real? Apparently McCormick’s written memoirs are a joy to read—whether one be a U2 fan, struggling musician, or curious reader vying for a detailaborate terrain—Neil McCormick has a way with words. After years of struggling to make it like his Dublin cohort, the real McCormick finds his calling as a now well-know writer and music critic. Apparently the title comes from Bono saying McCormick would have to metaphorically kill him to get over and move past the divergent outcomes of their fates. But however true or untrue Killing Bono (the movie) is, I was entertained. Somewhere between Shakespearean staging and Wes Anderson tongue-in-cheek, Hamm crafts an tantalizing spread, supported with rich English and Irish acting talent.

Old favorites include Ralph Brown, and the late Pete Postlethwaite as the young brothers’ flamboyant-yet-fatherly gay fashion photographer landlord, Karl. An English stage and Oscar-nominated screen legend in his own time (from Shakespeare to Amistad, Inception, In the Name of the Father and The Lost World: Jurassic Park) this was the last film  Postlethwaite completed before he passed in 2011.

Robert Sheehan, Ben Barnes (Stardust, Dorian Gray, and The Chronicles of Narnia) and Martin McCann also caught my eye. Yes they’re good-looking, but they emote enough believability in respect to their roles. Sheehan’s expressions are fun to watch too—with his big, expressive blue eyes and pleading eyebrows. This film is worth the watch. U2 fan, searchingmusician or hopeful film-watcher, there are enough reasons for anyone to find their own to  check it out.