Posted in: Disc Reviews by Gino Sassani on February 24th, 2012 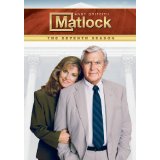 The seventh season of Matlock brought more of the same. If you’re a fan, that’s very good news indeed. What is that, you ask? Imagine Sheriff Andy Taylor older and now an attorney, and you pretty much have the setup for Matlock. Forget for a second that both characters were played by Andy Griffith. That’s not all they have in common. Matlock is every bit the “southern gentleman” that Taylor was. He might be a little smarter, but he walks and talks like Andy Taylor. The series did, however, jump networks with this season. After spending six seasons on NBC, the show moved to ABC with a couple of changes. Michelle, played by Nancy Stafford left the show as the 6th season was originally considered the series finale. As the 7th opens Matlock’s older daughter Leanne enters the partnership, played by Brynn Thayer. Law graduate Cliff Lewis, played by Daniel Roebuck, also joins the firm as a new lawyer.

Matlock began life as a television movie from Dean Hargrove, who brought us Columbo. Hargrove would later work the same magic with Dick Van Dyke in Diagnosis Murder. In fact, the two shows could easily have been companion pieces. Both featured sit-com stars from the 1950’s and 60’s who had become somewhat iconic characters. Both would don the role of professionals. Both shows would subscribe to the “formula” mode of storytelling. Diary Of A Perfect Murder would set up the Matlock formula. It’s simple, really. Matlock was a lawyer in Atlanta. Some wronged defendant, usually charged with murder, would show up asking for Matlock’s help. Matlock and his team would investigate the crime with an eye toward, as OJ Simpson is fond of saying, finding the real killer.  His team consisted of his daughter Charlene, herself a competent lawyer, and Tyler Hudson (Holliday), his private investigator. In the pilot the Matlock character was less Andy Taylor and a little more slick at first. I’m sure that while it was intended to show Matlock’s prowess as a high-priced attorney, somewhere along the line it became obvious that the show’s finest asset was Griffith himself and that southern charm he was already famous for. Whatever the reason, you can see the character soften significantly during the early episodes of the season. And that decision was a smart one, as Matlock would continue for nearly a decade.

So what is old Ben Matlock up to in his 7th year? With his new staff in place, Ben Matlock and daughter Leanne take a vacation for Leanne’s college reunion in The Vacation. Of course, vacations are always bad news for television heroes, and this one is no different. One of Leanne’s becomes a murder suspect. In The Ghost, Matlock is hired by a man who turns out was the murder victim before Matlock even saw him. Was Matlock actually hired by the man’s ghost? It doesn’t help Matlock’s investigation that pretty much everyone who knew the guy wanted him dead. In The Class, Matlock is a guest lecturer at a class and may have unwittingly given one of his students the inspiration to commit the perfect murder. Matlock ends up on jury duty in The Juror and, of course, he makes waves during the trial. Matlock doesn’t really like his ex-son-in-law but will he defend him from being wrongly accused of murder. That’s the question in The Debt.  It’s all waiting for you in this 5-disc set with all 14 episodes (many of them are 2-parters).

Each episode of Matlock is presented in its original broadcast full-frame format.  There’s not a lot to love in this transfer. The picture is almost always grainy. There are too many overt instances of compression artifact. In general this was not a carefully-prepared transfer. I’m sure Paramount expects the fans to take it as it is. Colors are fair, but there is a subdued overall tone to the entire presentation. Black levels suffer the most and are quite poor.

The Dolby Digital 2.0 track delivers exactly what you are looking for and nothing more. The dialog is clear, and that’s all you’re going to get out of this minimalist presentation. The jazz music theme comes out nice and clean.

After the 6th year everyone thought that Matlock was dead and gone. After a jump to a new network with a reworked cast, the country lawyer was more than alive and solving cases again. The move bought the show three more seasons, and now you can start to enjoy those Matlock bonus years beginning with the 7th season set from Paramount. “Shouldn’t we get to it, then?”

Gino Sassani is a member of the Southeastern Film Critic's Association (SEFCA). He is a film and television critic based in Tampa, Florida. He's also the Senior Editor here at Upcomingdiscs. Gino started reviewing films in the early 1990's as a segment of his local television show Focus. He's an award-winning recording artist for Omega Records. Gino is currently working on his 8th album Merchants & Mercenaries. Gino took over Upcomingdiscs Dec 1, 2008. He works out of a home theater he calls The Reel World. Favorite films: The Godfather, The Godfather Part II, The Body Snatcher (Val Lewton film with Karloff and Lugosi, not the pod people film), Unforgiven, Gladiator, The Lion King, Jaws, Son Of Frankenstein, The Good, The Bad And The Ugly, and Monsters, Inc.
Killing Bono The Son of No One (Blu-ray)