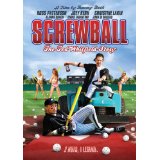 Through the course of time Hollywood has given us a fair share of great sports films.  There are even a few baseball films out there I’m sure are on several people’s all time favorite lists.  Personally I’m a fan of The Sandlot, and I recently discovered Eight Men Out. I wouldn’t say I’m a baseball fan, and to be honest I haven’t watched an entire game in years, but yet I do love a good baseball movie.  I mention this only because after watching Screwball, I seriously will be content never to watch a sports comedy again after the bad taste this left in my mouth.

This mockumentary follows the rise and fall of the great waffle ball player Ted Whitfield.  His rise was during the baseball strike in ’94 and as fans turned to waffle ball to fill their baseball void, Whitfield sets out to break the homerun record.  Over the course of the film we see Whitfield get involved with enhancement drugs, heavy drinking, and even dabbling into porn.  A high point of the film involves Whitfield passing on his cup to his loyal team member Willie Hamilton after winning a big game.  Sadly the day after Whitfield smashes the homerun record he is arrested for a DUI on a riding mower, and things just crumble from there.  Once a blood test is done and it is discovered Whitfield took enhancement drugs, he is banned from the league for life.

Throughout the film we are given interviews with various friends and players who share their stories about Whitfield.  One interview involves a fan that is constantly eating peanuts, which works as a subtle sight gag for a while, but even this is overdone.  The scene-stealer of the film belongs to Christine Lakin (Step by Step) who plays Kiki, Willie’s wife.  Kiki and Willie’s antics with sex tapes and at one point using a beer bottle for the baby did bring a giggle out, I must admit.

I understand comedy is difficult to pull off, but it shocks me this movie was ever made.  A lot goes into making a film, but I have to wonder was there even a script for most of this, because a lot of the interviews and footage shot feels like we’re watching a very long unfunny blooper reel. As a sketch this could be funny, but stretched out to just about 90 minutes this feels like my funny bone was tickled with razor blades.

Brent Lorentson is a horror writer and film critic based out of Tampa, Florida. With a BA in Digital Film, he co-wrote and co-directed Scavenger Hunt. His short stories have appeared in various horror anthologies. In 2019 his short script Fertile Blood will be a part of the anthology horror film Slumber Party. He is currently working on his first novel A Dark and Secret Place set to be released in late 2019. Favorite Films: Taxi Driver, Fight Club, I Saw the Devil, The Wild Bunch, Dawn of the Dead, A Clockwork Orange, Pulp Fiction, Heathers, The Monster Squad, and High Fidelity.
Hitting The Nuts Todd & The Book Of Pure Evil – The Complete First Season