Todd & The Book Of Pure Evil – The Complete First Season 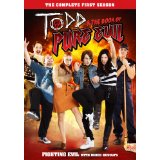 “You already started reading the evil words, didn’t you? Then could you pass me my blood mop? I’m gonna need it later.”

Somehow I was never aware of Todd & The Book Of Pure Evil: The Complete First Season until I received the DVDs to review. Based on the 2003 short film of the same name, Todd & The Book Of Pure Evil debuted on Canada’s Space Channel in September of 2010 and was picked up for broadcast in the United States by FearNet, which started showing the series in August of 2011.

No one I know, even the fanboy nerds that I call my closest friends and mentors, had heard of it. Yet on IMDB it has received an 8.4 rating out of 10, and to put that in perspective, Lost, M*A*S*H,  Babylon 5, and American Horror Story hold an 8.4 rating on IMDB. So I was quite curious what these thirteen episodes held for me. Turns out they held a horror comedy series so raunchy, gory, sexy and goofy, after watching just a couple of them I invited my friends over for a marathon. We laughed our asses off.

The story takes place in the quaint, but despicably evil burg of Crowley (and in a rare instance they actually pronounce Aleister Crowley’s last name correctly – CROW•LEE). Todd (Alex House) and his best friend Curtis (Billy Turnbull) are stoner loner students at Crowley High. The series opens with them on stage in a talent show/battle of the bands as a two piece wannabe heavy metal band known as Barbarian Apocalypse. They proceed to epically fail.

After speaking with the three wise stoners in the parking lot, Todd sets off on a quest to find The Book of Pure Evil, a satanic tome empowered with the ability to grant one their deepest desire. Of course, this being a tool of Satan’s, the book acts like the magic monkey paw, making sure the granted wish quickly sours. Todd discovers this after when the book transforms him into a heavy metal rock god whose blistering guitar licks cause listeners to bleed from all orifices.

Curtis enlists the help of Todd’s hopeless crush Jenny (Maggie Castle), a hot Goth chick with a dark past, and Hannah (Melanie Leishman), a geeky brainiac secretly longing for Todd. Together they somehow break the enchantment. Unfortunately the Book of Pure Evil has a bad habit of flying off to find its next victim when the spell is broken. Being that it feeds on the weak-willed and desperate, the high school environment provides the book the ultimate feast. Soon our four heroes form a Scooby Gang and begin hunting the book. Their attempts are tracked and thwarted by the evil guidance counselor Atticus Murphy, Jr. (Chris Leavins). Leavins is hysterical and constantly steals any scene he is in.

The chemistry between the actors is infectious and amazing. The writing sends up all the horror tropes with tongue planted firmly in cheek. Even though the most of the effects are practical and maybe a bit low-tech, they are inventive, effective, and often tear-inducing funny. Although it does play out as a procedural, with a Book of Pure Evil victim each episode, there is a continuing story arch involving Jenny’s search for her missing father and his connection to the book, as well as Atticus’s attempt to attain the book to please his father’s satanic cult in the local old folks’ home.

The show is frequently irreverent and bit irreligious, yet somehow it sneaks in relevant commentary on such uncomfortable teen problems subjects such as Lesbianism, Homophobia, Virginity, Teen Pregnancy, Penis Envy, Obesity and even the dreaded High School Musical. Not that this is an after school special or any such shit; this is a heavy-metal, devil-horn-throwing  horror comedy, and if you are easily offended you should skip this class, but if you like your humor a little profane, wet and “good squishy”, you’ll love Todd &The Book of Pure Evil: The Complete First Season.

Todd & The Book Of Pure Evil: The Complete First Season is transferred to DVD in a 1.78.1 anamorphic widescreen. The video is fairly stable with solid black levels and decent color reproduction; reds and blacks are highlighted as they should be with the themes of this series. Shot on HD video cameras, the digital transfer to standard def is detailed and sharp with only minor artifacting and shimmer.

The English language Dolby Digital 5.1 Surround Sound mix is wonderfully immersive in the surround with robust LFE channel response. The sound design makes full use of the insanity on the screen, from rampaging giant penises to the flapping wings of the book as it escapes. The dialog is crisp and well mixed with the SFX and soundtrack music.

Think of this as cruder and lower budgeted Buffy the Vampire Slayer amped up with a subversive sense of humor and an Evil Dead level love for goop and gore. I’m not one for sitcoms, and the acting in the pilot is pretty broad, but damn if this cast doesn’t grow on you and you care about the characters. Anyone who has ever felt they were an outcast in high school can relate. I love that this is easily the worst high school administration ever. There is an American version with all the profanity removed and redubbed by the cast, but that would neuter this show. Yes, it can be profane, but if you love the humor in movies like the Evil Dead Trilogy, you’ll thank the gods of the underworld that it is so damned funny. Can’t wait for season two.

“You kids sure know how to party! I haven’t seen this much blood since that kid bled out his ass this morning.”