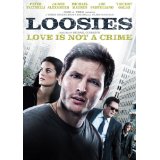 Oh, Peter Facinelli, how I hope that this movie that just landed in my lap does NOT feature you with glitter thrown all over your body. This movie is called Loosies, and no not as in loose like Kristen Stewart. I am hoping that the tag line, “Love is not a crime”, does not mean complete suckage, but from the description on the back… I am not hoping for much. I loathe chick flicks, and this reeks of one. But on we go with an open mind and an open beer (Okay, okay, so it’s a root beer! Geez!)!

Holy wow! The music that rolls during the menu screen is absolutely awful. This can not be a good sign. Woosa! This is ok with me, Bobby (Peter Facinelli) and Lucy (Jamie Alexander) are in bed. She is passed out after a romp in the hay. Next, we see him walking around a red room. He gets dressed, writes his number on a bunch of pieces of paper and walks out. He’s walking around town pick pocketing people. Oh that is a lovely job. Jax (Vincent Gallo) is doing some whacked form of martial arts?

Captain Tom (William Forsythe) is sitting in his office looking down at a newspaper. He makes a phone call for someone to get their behind in his office. Ohhh, someone is in trouble! Captain Tom wants to take Lieutenant Nick (Michael Madsen) off the case he is on, but he wants to catch this guy. Some one stole his badge, and he doesn’t want to look like a tool anymore. He leaves the Captain’s office and brings a man that was arrested into the back of the jail. He tells the guard to take a break, closes a door, and covers the window with his jacket. We know where this is going. Whack, punch, hit. He beats the guy and end scene.

Bobby is unloading all the things he stole at Jax’s apartment. Jax complains because of some cell phones and throws them on the floor. What I would like to know is why, during this whole movie, is Jax almost never dressed. I know he is supposed to be all bad guy and ugly, but he really took the role too far. Anyways, they settle up on a price, that is clearly not fair, and he goes about his business.

Bobby schmoozes some chick into thinking he is awesome for returning her wallet. They have dinner at a really fancy place. He is really laying it on too. “Oh, I am going to pay for dinner (with a CC I stole) because I don’t want you to think I only helped you to get something out of it”. Lies! He wants what is in your pants! Your wallet, of course, what else did you think I meant? Perverts, I swear. So, he goes to pay for the dinner with a credit card he stole, and it gets declined. This tips off the cops and they head for the restaurant. He goes to use another credit card he stole, and the waiter pulls him aside because of the different names, Bobby claims that this is the credit card he put the big tips on, and the guy okays it. Bobby sees the cops coming in and he gets up and makes his way out, bumping into one of the cops, and taking their cuffs. He uses those to chain the doors on the outside, he is gone, and the cop is mad.

Rita (Marianne Leone) is freaking out about a rat that is crawling around their kitchen. She yells for Bobby and she picks up everything she can to hit this rat. But, she ends up clocking Bobby with everything. Rat is gone now and they are talking a bit. She asks him for money for Bingo, and after a conversation about gambling, he gives her money for bingo. Bobby goes out to a train station to score some loot. He runs into the chick from the beginning that he was in bed with. Oh? What is that? I am pregnant and it’s yours! Surprise!

This movie has holes ALL through it. The story itself is tired and predictable. You know how it is going to end way before it comes to a close. But it is not only the ending, everything from where I stopped you can guess before it happens. The cops, especially, are incredibly boring. Not really the actors fault they were given such boring and predictable lines. But all together this movie was just that, boring and predictable. If you are a fan of Peter Facinelli, you get some nice shots oh him half naked, and some rather racy scenes. Is it enough to buy this DVD? No.