Jb Smoove: That’s How I Dooz It

Posted in: No Huddle by Brent Lorentson on April 5th, 2012 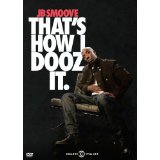 When I first got this DVD I really had no idea what to expect.  The title of the stand-up act, That’s How I Dooz It, didn’t inspire much confidence in this comedian I knew nothing about.  Instead of checking him out online and getting a feel for the guy, I decided to risk it and go in with a blank slate; after all, it’s only 60 minutes and can’t be that bad.  So I slid the DVD in the player and got comfy.

Right from the start JB Smoove knows how to make an entrance.  He comes out with his hip-hop theme That’s How I Dooz It, and  he is full of energy as he explains to the crowd how much he loves the song and how it  is perfect for nearly every occasion.  He goes on to act out a police chase while driving a stagecoach as the theme plays on.  His expressions alone were enough to get me laughing from the start.  On stage with him is a microphone stand and a metal chair; both are used as props throughout the performance, and it shocks me how many uses one man can find for a chair.

He moves on to talk about how things are in Los Angeles and the difference between being arrested and going to jail.  My favorite part of this bit revolves around cops hating to chase after criminals because of all the stuff they carry on their belts.  After pointing out everything cops have to carry around I did find myself sympathizing with them and how annoying it must be.  He moves on to discussing how when the cops cuff you they mess with the ligaments in your arms and somehow manages to turn this into being about pulled ligaments between your legs during kinky sex.  How Smoove makes the connection between the bits is just a glimpse at the man’s talent.

There are many bits throughout this routine that I found myself laughing at and even later replayed.  The energy he maintains through the show makes most other comedians appear lazy by comparison.  His closing bit of how King Kong would have been a different movie if Kong had a Johnson is something to be witnessed by those who appreciate physical comedy.  It’s with the physical comedy Smoove excels, and right now I can’t think of anyone who does it better.  It’s after the performance ended I asked myself, who is this guy and why isn’t he in more?

This happens to be JB Smoove’s first comedy special, and seeing he has a recurring role on Curb Your Enthusiasm  I’m sure his name is only going to become a more household name.   Granted he’s not Richard Pryor or George Carlin, but he’s off to a good start at doing what he dooz best.

Brent Lorentson is a horror writer and film critic based out of Tampa, Florida. With a BA in Digital Film, he co-wrote and co-directed Scavenger Hunt. His short stories have appeared in various horror anthologies. In 2019 his short script Fertile Blood will be a part of the anthology horror film Slumber Party. He is currently working on his first novel A Dark and Secret Place set to be released in late 2019. Favorite Films: Taxi Driver, Fight Club, I Saw the Devil, The Wild Bunch, Dawn of the Dead, A Clockwork Orange, Pulp Fiction, Heathers, The Monster Squad, and High Fidelity.
Chasing Madoff (Blu-Ray) Chinatown (Blu-ray)