Posted in: Disc Reviews by Michael Durr on April 5th, 2012 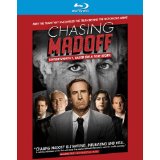 Thankfully, I have never been scammed out of any large amount of money unless you count my ex-wife. *drum roll*. I think of myself as fairly intelligent but sometimes intelligence is not enough when a large enough pyramid or ponzi scheme walks across your front lawn. Furthermore, when somebody you trust tells you it is a sure thing, it is hard to look the other way. Let us proceed with a documentary on one of the most famous ponzi schemes of them all with deception played by one Bernie Madoff.

Melodramatic music go! Blood dripping! Fire crackling! Wife snoring! Oh wait, nevermind. In the beginning, we hear a quote that Wall Street has always been about making a profit. Then we hear a bunch of news reports about Bernie Madoff pulling off a $50 billion ponzi scheme. Outrage is rampant and people want to know why the SEC did not catch this sooner. Let’s join H. David Kotz, Inspector General for a sentence or two before we get more dramatic special effects.

Our first real guests are Harry Markopolos, former Chief Investment Officer for Rampart Investment Management along with Frank Casey, the former Senior Vice-President of Marketing. There is also Neil Chelo, a former Portfolio Manager. These were the brains of Rampart (until they left). One day Frank Casey heard about another manager that was doing the same work as what would normally take a whole lot of little managers and pulling out a nice revenue stream to boot. Frank had to find how they were doing it.

The name of the investor Frank spoke to was Thierry de la Villehuchet. Thierry was very reluctant to talk about the details of his manager that produced this steady stream of revenue. However, what the investor did do was send Frank home with some marketing material for Harry to run some numbers. It smelled of fraud from the minute he looked at it. Frank doubted Harry at first, but the more the math whiz probed, the more it looked to be true. This was going to rock the world. Like a match on a flame babie!

Thierry finally gave the name of his investing manager and that man was Bernie Madoff. Dun dun dunnnnnnn. Neil Chelo rechecked the numbers and confirmed Harry’s fears. Then, the fears became even more real when Harry wanted to stab at the fact that it might be a ponzi scheme. Cue the trumpet music! We get some history about the ponzi scheme. It is a classic case of robbing Peter to pay Paul but eventually along the way it eventually crumbles under its own weight.

Madoff was no normal man; he was a chairman of Nasdaq, words against such an individual held serious weight. Harry took his findings to the Boston Securities and Exchange Commission in May of 2000. Wait, wait we need more history with old-timey film. Their hope of course was that the SEC would jump right on the notion. But the truth was that the SEC received thousands and thousands of complaints each year and this one would not receive the light of day for a very long time.

Concern was also put on Harry for his life. Madoff was a very powerful man. If they did not proceed carefully, their own life would be ruined. Thankfully, Harry and his team believed in fighting for what they stand for. But in the wake of everything that happened, it would destroy lives and many men, women and families would enter financial ruin because things were not done to stop this a whole lot sooner.

Let me preface this scathing commentary by mentioning that what happened to those thousands and thousands of people with billions and billions of money was a travesty. Harry Markopolos (even though he does not think so himself) is a modern day hero. Sure, he was not able to save retirements, investment capital and companies from financial ruin. But he did all any reasonable man could, and in the end it was not his fault that the SEC was run by a bunch of chimpanzees. He performed a great service and should be commended.

With that said, this documentary is worst piece of melodramatic mess I think I have ever seen. The information seems accurate without too much research but everything is like a bad Unsolved Mysteries episode. We get sound effects, we get dramatizations (and bad ones at that), and we get poorly lit rooms where they hold interviews. It is almost as if they found an old interrogation room somewhere and sat these three (Harry, Frank, and Neil) and asked where they were on the night of May 1st, 2000.

The documentary comes off very hokey almost to the point where it takes a very serious situation and makes it laughable. Furthermore, whether it was intentional or not, Harry is portrayed as extremely paranoid and extremely depressed. Harry alludes to the fact in the film that he not only would take out Bernie Madoff if he had too (by physical means) but also he trained his two twin sons in survival techniques should the house ever be ambushed. Yes, whistleblowers history tells us can be murdered, but this guy has clearly seen one too many mafia motion pictures.

The video is in 1.78:1 Widescreen presentation at 1080p. The presentation is a mixed bag. When they do full light, interview segments the detail and color is top notch. However, since a lot of the dramatic shots feature low lighting or funny effects the quality becomes dodgy and inconsistent. It still gets the job done but in a fashion that is less than impressive.

For the audio portion, we get a 5.1 DTS-HD Master Audio track in English. The sound is pretty good, dialog of course jumps to the front and is quite clear. There are also plenty of music and sound effects to make it seem all dramatic. Despite being very hokey, it comes across with some certain bass and umph. Surround channels are used frequently and for a documentary, the sound is solid. Subtitles are provided in English SDH and Spanish.

Again, let me make perfectly clear; the Bernie Madoff situation ruined a lot of people’s financial lives. Harry Markopolos is a hero plain and simple. However, this documentary only makes the situation into a complete mockery from beginning to end. Whether it is a melodramatic mess to portraying Harry in an extremely eccentric light, the documentary does not serve its purpose.

The disc is fairly sound with adequate video and above average audio. The extras feel tacked on and serve little purpose here because of the poor execution. No recommendation can be found here. I would suggest that if somebody wants Harry’s point of view that they check out his book titled “No One Would Listen: A True Financial Thriller”. At least you won’t have hokey sound effects and oddly placed old-timey trumpet music.

Michael Durr has been reviewing movies for the better part of fifteen years now. He primarily enjoys thrillers, sci-fi, animation and even a little courtroom drama. His favorite films include Escape from New York, the Goonies and anything with Alyssa Milano. When he’s not praising Kurt Russell as the greatest actor of our time or scratching his head over a David Lynch flick, he’s spending time at home in Texas with his lovely wife, Lori and his amazing son. How they put up with him is a mystery, but even Basil Rathbone doesn’t have the time to solve that one.
Dysfunctional Friends Jb Smoove: That’s How I Dooz It