Posted in: Disc Reviews by David Annandale on April 6th, 2012 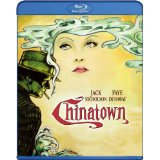 Roman Polanski’s seminal neo-noir finally makes it to Blu-ray. Gino has already handled the previous DVD release, so I’m going to turn the reins over to him for a while, then jump back in.

“Jake Gittes is a Chandler style detective with all of the trappings. From the office to the secretary and the cop friend, Gittes is a cliché. He appears to specialize in tracking down extramarital affairs. When he’s hired to keep an eye on a rich millionaire, the subject turns up dead, and maybe it wasn’t his wife at all who hired him. Gittes now must investigate to save his own hide. His investigation leads him to a corrupt water department taking advantage of a manufactured drought. His client has a dark secret that only complicates Gittes’ efforts.

“Jack Nicholson’s career has been decades of a man who is constantly redefining himself. Few actors have created as many memorable roles; among them has to be Jake Gittes. This Raymond Chandler styled character first appeared here in the Roman Polanski Film Noir Chinatown. The feel of Chinatown was far more effective in 1974 than it is today. Unfortunately the style has been done to death and often with disastrously horrid results. Still, in 1974, Polanski was able to create an effective atmosphere and use it not just for style but as a place to tell an engaging story. Chinatown takes you to a Los Angeles that simply no longer exists. He utilized many locations that were even in 1974 on the verge of disappearing forever. Perhaps one of the reasons that the style has never been reproduced quite so successfully since is that Chinatown was made at just the right time. The last dying embers of the Los Angelesbetween the wars are caught on film, making Chinatown a somewhat historical event in itself.

“No one will argue that this is a solid cast. Jack Nicholson had not yet established himself to this point, and he admits that Chinatown went a long way in the start of that for him. I’m not much of a fan of Faye Dunaway, and I did not enjoy her at all in this film. She tries far too hard to walk in the shadow of the Golden Age actresses, so that it becomes almost ridiculous to watch. She attempts with the turn of her head or a puff of a smoke to remind us of Lauren Bacall or Greta Garbo, but it’s mere play acting, and obvious play acting at that. Perry Lopez is solid as Jake’s friend/nemesis cop Escobar. He holds his own even when going toe to toe with Nicholson, and that’s never been an easy task. John Huston is hardly in the film at all as the ultimate bad guy, but his presence dominates the piece. This was truly an unforgettable role for the actor known mostly for his direction efforts. The actors, for the most part, fit their roles well, only adding to the atmosphere Polanski fills every frame with. This is an excellent film to watch if you are interested in the subtle nuances that combine to carry the audience to another time and place.

“With all this said, Chinatown is not anything close to a great film. There are many flaws that keep it from crossing over that threshold. The pacing is tiresome. The film often bogs down in terribly clichéd dialog. The running time is too long, and it suffers from uneven editing. This likely explains why the film was good enough to be nominated for 11 Academy Awards but take home only one. The film has a lot going for it and is more than worth a second or even third look, but time has given the film a classic status that is not completely deserved. As Maxwell Smart would say: “Missed it by that much”.”

Let me add that I like the film rather more, myself, but that this is a fondness that was some time in developing. What really stands out for me, and what keeps me coming back to the movie again and again, is the meticulous attention to detail: Dunaway’s stutter every time she mentions her father, the complex and repeated foreshadowing involving her eye, and so on. There isn’t a single extraneous element in the plot. Everything we encounter comes back again, creating a web of powerful, inescapable fate.

This is the best I’ve ever seen the film. Yes, we’ve had the 2.35:1 anamophic widescreen presentation before, but the colours strike me as being stronger and richer than before. The blacks are profound, and the reds are stunning. The restaurant scene, where those two colours are very prominent, has always looked terrific, but even the more visually subdued public hearing sequence looks extra handsome now. The AVC codec maintains a stunning 28-38 Mbps. The image is razor sharp without ever tipping into the grotesquely clinical, and there is virtually no grain. A wonderful transfer.

A few sound options here, including a restored mono and a TrueHD 5.1. The latter does a good job, all things considered, and it is (as Gino points out in his review) the Jerry Goldsmith score (famously composed in nine days) that is particularly well served by the remix. But this is, when all is said and done, a 1974 film that was originally in mono, and so there are limits to what the 5.1 can do. Obvious opportunities for surround impact (such as when sheep invade the aforementioned public hearing) are passed over, and the sound is a bit harsh and thin by contemporary standards. Still, a nice job over all.

Water and Power: (1:17:50) A feature-length documentary (divided into three parts: “The Aqueduct,” “The Aftermath” and “The River and Beyond”) about the Los Angeles aqueduct, which Town visits for the first time in 2009. This is less about the movie than about the issues and historico-geographical background with which it deals.

The other extras are the same as on the DVD release, so I’ll turn things back over to Gino here:

“Chinatown – The Beginning and the End: This 19 minute collection of interviews covers a lot of ground. Roman Polanski, Jack Nicholson, and writer Robert Towne talk quite candidly about their experiences with Chinatown. Polanski explains how reluctant he was to return to L.A. when this was his first film back after the brutal Manson murders which included his wife, Sharon Tate. We discover that Chinatown had been planned as a trilogy. It’s no surprise to find out that Raymond Chandler was an inspiration to the film. There are moments where their recollections are not the same. Unfortunately these are separate interviews and they are not together.

“Chinatown – Filming:  This 25 minute feature is an obvious continuation of the first. I’m sure they were split for residual reasons. Robert Evans, producer, is added to the mix here. This section focuses on those crucial L.A. locations. The nose incident is discussed and a few on-set spats are admitted.

“Chinatown – The Legacy: (9:37) It seems no one really expected the film to be as successful as it was, and yet all parties were ultimately disappointed in its final status. Each of the four talks about how they viewed the film then and now.

One of the essential films of the 1970s. It’s an acquired taste, that’s for sure, but it is something of a landmark.

Jb Smoove: That’s How I Dooz It Real Adventures of Johnny Quest: Season One, Volume Two