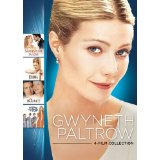 Miramax and Lionsgate have released film collections starring American actresses who from time to time talk with British accents, Gwyneth Paltrow and Renee Zellweger. Lionsgate is flying high now with the gigantic success of The Hunger Games shooting its stock price through the roof. It’s time to visit the vault and relive some past successes.

Gwyneth Paltrow had a big early rise to the top and was the golden girl for quite a while, basking in the glory of being Brad Pitts fianceé. It’s been a long time since those days, and now she is spending much of her time being a mom to Chris (Coldplay) Martin’s kids. She also has been doing more and more singing in movies like Country Strong and the TV show Glee. She has even been doing cooking shows with Mario Batali  (though there is some controversy about a cookbook she has written).

The four films selected for this collection are Shakespeare in Love, Emma, Bounce, and View from the Top. This is clearly only a small sampling of her talents. Some people seem to see her as stuck up; I never got that feeling from her work, but you know how internet bloggers are. She always seemed fragile and earnest. So before we talk about these four films, we should look at some the films that were ignored.

After becoming a mother and sort of retiring, she was brought into the Iron Man franchise which has allowed her to play Pepper Potts in four films. This is the sort of part she was made for, intelligent and capable with a touch of sex appeal.

Paltrow is also adept at playing damaged, somewhat crazy women like the self-destructive country singer in Country Strong, Estella in Charles Dickens’s Great Expectations, the daughter worrying that her father’s madness has been passed on to her in Proof, the precious and emotionally stunted genius Margot in The Royal Tenebaums, or the famous poet who somewhat romanticized suicide for generations of young women playing Sylvia Plath in Sylvia.

Two of Gwyneth’s famous boyfriends have starred with her. Brad Pitt got her involved in his film Seven back in 1995. She later starred with Ben Affleck in two of our featured films, Bounce and Shakespeare  in Love.

Bounce is an inventive film which uses tragedy to bring together two potential lovers.

Ben was a supporting player to his good friend in Shakespeare in Love, which won a few Oscars including one for Paltrow as best actress. Paltrow frequently used her ability to act British as she did in the Jane Austin classic Emma and a more modern version in Sliding Doors. Paltrow now lives in London full time. Emma was the beginning of this Anglo-centric approach, and it fit her beautifully. It was one of her first starring roles, and she seemed so natural in it that many people thought she was British.

View From The Top was a broad comedy about stewardesses. It was one of her biggest paychecks if not one of her biggest successes. It also co-starred a typically zany Mike Myers. A more successful comedy was Shallow Hal which allowed Gwyneth to wear a fat suit in a Jack Black vehicle.

This collection is clearly a hodgepodge sampling that doesn’t summarize her career. It doesn’t include what I consider her best film, The Talented Mr. Ripley. That film gave her a role that best exemplified the image that most people have of her, whether it is deserved or not, that of an icy and rich bitch.