Posted in: Disc Reviews by Gino Sassani on April 6th, 2012 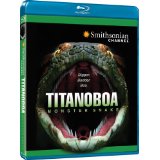 “In the pantheon of predators, it’s one of the greatest discoveries since the T-Rex: a snake 48 feet long, weighing in at 2,500 pounds. Uncovered from a treasure trove of fossils in a Colombian coal mine, this serpent is revealing a lost world of giant creatures. Travel back to the period following the extinction of dinosaurs and encounter this monster predator.”

With a title like Titanoboa: Monster Snake you might be expecting the latest huge monster mash-up from Roger Corman or the latest cheap CG creation from the SyFy’s Original Movies series. Huge snakes have been common fodder for both of these places. But the monster snake depicted in this film comes to us from The Smithsonian Channel, and this guy really existed.

“A lost world of giants 60 million years old ruled by a slithering monarch of unbelievable size. It sounds like fantasy, but it’s not. This world was once here.”

It started with a commercial dig in Columbia. Scientists were called in to collect the many bones being discovered before the work could continue. It was expected that the team would find some rather large prehistoric crocodilians. But back in Gainesville, Florida at the University Of Florida one of the staff noticed that some of the bones didn’t look crocodilian at all. They were snake bones, and if that was true they were from the largest snake ever discovered. Now the search was on for more before the site was destroyed and along with it any chance to unlock the secrets behind this discovery.

The piece is narrated by Jim Conrad. We are taken to the dig itself and get to see how the first bones were uncovered. Then it’s back to Florida where the first identification was made. The piece allows the participants to tell the story while dramatic computer-generated footage gives us an idea of what the snake might have looked like and how it might have lived.

The piece also looks at current-day snakes and makes some extrapolations. Unfortunately, here is where the piece joins the rather exaggerated infestation of pythons in the Florida Everglades. Yes, they are there, but not in the thousands that fear-mongers have stated. It’s actually quite hard to find one there. The piece also takes us to other locations where huge snakes live today.

Finally, the information was used to create a life-sized model that will tour the world, giving the rest of us a chance to have an encounter with the beast.

The film has a good balance of education and entertainment value and feels a lot like those IMAX films often playing at the local science and industry museums. It’s actually a production from the Smithsonian Channel and has been airing on television.

Titanoboa is presented in its original aspect ratio of 1.78:1. The 1080p image is arrived at with an AVC MPEG-4 codec at an average 20 mbps. This is a documentary, so expect the image presentation to reflect that fact. It looks at least as good as the television broadcast. The computer generated stuff is a bit low-budget which means it’s rather a softer image with less high-definition detail and a pretty unremarkable texture.

The Dolby Digital 5.1 is really just dialog with little else to make up the audio presentation.

I work in the reptile trade myself, so the idea of this huge creature holds some additional fascination for me. Smithsonian does a good job of presenting the material and providing a little excitement. It is, however, a documentary and should be approached with that in mind.  That doesn’t mean that our monster snake isn’t “captured in all its grotesque detail”.

Gino Sassani is a member of the Southeastern Film Critic's Association (SEFCA). He is a film and television critic based in Tampa, Florida. He's also the Senior Editor here at Upcomingdiscs. Gino started reviewing films in the early 1990's as a segment of his local television show Focus. He's an award-winning recording artist for Omega Records. Gino is currently working on his 8th album Merchants & Mercenaries. Gino took over Upcomingdiscs Dec 1, 2008. He works out of a home theater he calls The Reel World. Favorite films: The Godfather, The Godfather Part II, The Body Snatcher (Val Lewton film with Karloff and Lugosi, not the pod people film), Unforgiven, Gladiator, The Lion King, Jaws, Son Of Frankenstein, The Good, The Bad And The Ugly, and Monsters, Inc.
The Killing: The Complete First Season (Blu-ray) Gwyneth Paltrow 4 Film Collection