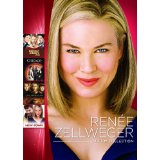 Miramax and Lionsgate have released two film collections starring American actresses who from time to time talk with British accents, Gwyneth Paltrow and Renee Zellweger. Lionsgate is flying high now with the gigantic success of The Hunger Games shooting its stock price through the roof. It’s time to visit the vault and relive some past successes. Renee Zellweger is one of those actresses that is hard to pin down. She seems award-ready coming out of the gate making a great splash in the movie Jerry Maguire. She had already starred in some low-budget films including Texas Chainsaw Massacre: The Next Generation with college buddy Matthew McConeghy.  I mean you can’t get any more low-rent than that and films like Love and a .45. Then she could move to exquisite character pieces like The Whole Wide World and A Price Above Rubies, and she didn’t seem out of place in either milieu. I think she carries that quality throughout her career. She has an ordinary and real quality. Her career seems peppered with variety.

The films in this collection are Bridget Jones’s Diary, Chicago, Cold Mountain, and New In Town.

Bridget Jones is a signature role because she has done it twice with another one on the way (in which Bridget Jones has one on the way). The British role seemed like a stretch for the Texas-born actress, but she made the transition effortlessly. She made another effortless turn in the film Chicago, singing and dancing in a very demanding old-fashioned big-time musical. In both cases, you never gave a thought to how she was adapting to these challenges, because you were so engaged with the internal struggles these characters faced and the vulnerability she projected. Chicago won the best picture Oscar, and like Bridget Jones, was a huge success.

Another great success was the film that won Renee her Oscar, Cold Mountain. The film was a Civil War epic on a grand scale, and her contribution was showy and a nice balance to a lot of the heaviness of much of the film.

New In Town is kind of the odd pick here, being one of her less distinguished efforts. But still, it’s nice that they include a lot of extras even in a collection like this.

As I’ve said, Zellweger has had a nicely varied career, and some of the movies not in this collection should be noted. She has three animated movies to her credit, Sharks Tale, Bee Movie  and Monsters vs. Aliens, partly because her voice has a kind of animated urgency that is unique.

Appaloosa was a great movie where she played the third part of a triangle which revealed a hidden psychological element of the old west, and her character was the key.

Another beautiful film was One True Thing in which Renee was the child in a family unit comprised by Meryl Streep and William Hurt in which a very difficult decision must be made.

One of my absolute favorites is Nurse Betty. The whole film is such a brilliant satire perfectly secured by her central performance which is so fierce in its delusional innocence.

Zellweger has been floundering a little lately. She hasn’t done anything in the last few years that has been outstanding. There is no reason why she shouldn’t deliver something amazing some time soon.

It would be nice if she got her personal life in a more mellow place as well. She had a brief engagement to Jim Carrey back when she made Me, Myself and Irene and an even briefer marriage to country music superstar, Kenny Chesney. It would be nice if Renee would find the same sort of stability that Nicole Kidman found with her country music superstar. It seems that Renee maybe needs to devote everything to her career. This collection certainly is a nice tribute to a very accomplished and committed actor.