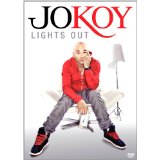 Back in 2009 comedian Jo Koy had his first comedy central special Don’t Make Him Angry and it made him a comedy star.  I had caught his previous special on comedy central and had seen him do spots on the late night circuit, so I somewhat knew what I was getting into.  I have to say, though, I was more than a little surprised how much he’s improved with time.  Not to say he needed improvement before , but it seems with Lights Out he’s hit his stride and has polished himself, and he simply just knows how to work a room.

He comes onto the stage, and instead of coming out swinging with joke after joke he engages his audience with stories about his Filipino family and life.  A good portion of the show involves the relationship he has with his mother.  Whether she’s warning him about “ruppies” being given out at the bar or not helping him find his keys, Koy is able to find the humor in the story and run with it.  Some of the stories with his mother seem a bit over the top, especially one revolving around her grabbing his penis, but it is impossible not to laugh at the horror and awkwardness of the story.

I can’t think of a low point in the show, but the high points involved Jo and his son.  Some of the routine might come off as being a bit crude but innocent, because it’s a father that loves his son, only his son has a bad habit of doing strange things with his penis, which leads into the “ting ting” story.  Some of these stories are simply hysterical, and no matter how many times I’ve played them over I’ve had fits of giggles that have brought tears to my eyes.  Even Koy’s simple argument over having kids; “mini-van…sports car” is something in time I can see becoming a phrase of the pop culture lexicon.  My words cannot give the man’s routine justice.

Comedy is a hard thing to critique, simply because what one person finds funny many may not.  What works with Koy is that his jokes are universal;  everyone can relate to dealing with their families as well as parents trying to raise their kids.  I’m looking forward to see what’s next for Jo Koy; he’s a young guy, and I believe he just might be the next great stand-up guy to break out and become a true comic star.

Brent Lorentson is a horror writer and film critic based out of Tampa, Florida. With a BA in Digital Film, he co-wrote and co-directed Scavenger Hunt. His short stories have appeared in various horror anthologies. In 2019 his short script Fertile Blood will be a part of the anthology horror film Slumber Party. He is currently working on his first novel A Dark and Secret Place set to be released in late 2019. Favorite Films: Taxi Driver, Fight Club, I Saw the Devil, The Wild Bunch, Dawn of the Dead, A Clockwork Orange, Pulp Fiction, Heathers, The Monster Squad, and High Fidelity.
Renee Zellweger 4 Film Collection Thou Shalt Not Kill… Except (Blu-ray)