Thou Shalt Not Kill… Except (Blu-ray) 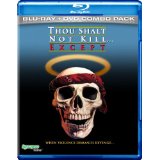 “Don’t you ever touch the sacrificial fluids… okey dokey?”

“Okey dokey” indeed; in 1985, director Josh Becker gathered his friends, including Sam Raimi and Bruce Campbell, and they shot Thou Shalt Not Kill… Except in Detroit around Campbell’s childhood home. Working with a microscopic budget, they created a tribute to the savage exploitation films of the sixties and seventies, full of bad lighting, crappy sets, leaden acting, cheap makeup gags, horrible dialog, and a certain goofy infectious fun.

Sergeant Jack Stryker (Brian Schulz) and his platoon ruled over the war in Vietnam until Stryker got critically wounded in the leg. His men heroically carried him out of the jungle against his protests to leave him behind. Sent back stateside, Stryker looks up his old girlfriend Sally (Cheryl Hansen). Things are going great until a Manson like cult leader (Sam Raimi) goes on a brutal neighborhood rampage leaving Sally and her family their latest victims. Stryker calls for revenge and gathers his old platoon back together to stop this cult once and for all.

Sam Raimi absolutely steals the show as the cult leader. His acting method is unique to say the least, going beyond over the top. It may not be good acting, but boy, it sure is entertaining. There is an obvious homage to The A-Team going on here, with each of the platoon reflecting their TV counterpart. Although the effects may be cheap, they are quite creative and gory, coming off like cheaper Evil Dead gags and, like that movie, it boasts a cheeky blend of humor and clever editing.

For years this was a hard-to-find film that film geeks had heard of, but rarely seen. Terrible VHS prints, bootleg dubs and poor DVD transfers didn’t do the film’s 16mm look any favors. Synapse Films presents Thou Shalt Not Kill… Except in an all-new 2K high-definition transfer from the original negative; they even rejected the initial transfer and pushed for a better transfer, and the results show. The movie looks better than it has any right to.

Although Bruce Campbell does not appear in Thou Shalt Not Kill… Except, he did co-write it and starred in the original 48 minute Super-8 short (which is included in the disc’s extras). I think the film would have been much, much better had he reprised the Stryker role, but his spirit definitely haunts the film. Raimi and Campbell completists will find this a must-own film for their collections.

Thou Shalt Not Kill… Except makes its debut on Blu-Ray with a brand new 2K high-definition transfer from the original negative in an anamorphic 1.66:1 Widescreen presentation. Limited by the source material, night scenes suffer from heavy digital noise, but the flesh tones are fairly natural, and the blood is vivid red. Gone is the red hue, scratches, specks, and dust from the original weathered film print. Grain is allowed to play its natural role here, and the overall transfer to Blu-ray is warm and never washed out. Synapse Films replicated the source material reverently, warts and all.

The DTS-HD Mono audio track finely balances dialog, music and effects. The pops, crackles and static prevalent on the 35mm print have been cleanly removed.   Joseph LoDuca’s score sounds rich and full, if a bit clichéd in a ham-fisted military way. Due to the mono nature of the track there is no surround with everything pitched to the front field.

If you liked Synapse Film’s release of Intruder you will love Thou Shalt Not Kill… Except, as it comes from the same creative team, and they lavish it with same attentive detail. If you are looking for a great movie or a flawless transfer you will be disappointed. This is a very goofy, silly, gory vigilante film. You will never look at Sam Raimi the same way again after you watch him play the manic Mason cult leader. Overall Thou Shalt Not Kill… Except is a fun cult curiosity from the team behind Evil Dead.

“You dirty little son of a bitch! I’m gonna do some nasty things to you.”