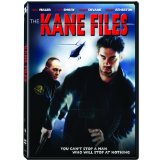 What will a parent do to save the life of their dying son?  This is the question that Scott Kane (Drew Fuller) is confronted with in the low-budget action film The Kane Files.  In a desperate race against time, Kane needs to get together the money to pay for his son’s heart transplant, and along the way there are plenty of bullets and plot twists to keep the viewer entertained, but the film lacks any real substance to warrant ever mentioning again.  Though not the most unique plot device for a film, the idea of parents doing whatever it takes to save their children is rich with potential that it frustrates me is never touched upon.

With a nonlinear story line the film makers have their fun playing with the viewer being careful to reveal who the real good guys and bad guys are.  This choice on their part was a wise choice; it made a plot that seemed rehashed come alive and left me feeling that possibly the unexpected was around every corner.  Our hero Kane has only one option in getting the money in time to save his son, and that means returning to a life of crime he promised his wife Anna (Whitney Able) that he gave up to have a life with her.  Desperate for the cash and willing to do anything to save his son, Kane takes the job which is to kill a man that is pressuring crime boss Daniel Morgan (William Atherton) into giving him money owed from a race or he’ll go to the cops.  When the hit goes bad Kane is on the run, and Morgan sends out all his men to find and kill Kane.  The plot, as I said, is fun, just poorly executed, which can be blamed on many things, but what matters is the film is still a fun little ride.  Along the way we meet an FBI Agent played by the great William Devane that simply chews up the dialog and makes it sound great (the man will always be a badass for me since watching Rolling Thunder).  Ethan Embry also is around as a local officer out to catch Kane; he’s the guy flexing the most acting chops here, and I’d like to see him playing some darker roles down the road.

Overall I say if you’ve got nothing else to watch throw this on, shut your brain off, and have a good time.  It has some good action and doesn’t drag or feel boring at any point.  The story is left open for a sequel ,and I wouldn’t mind seeing a series of these films.  A little more action and a little more skin and they’ll have me hooked.

Brent Lorentson is a horror writer and film critic based out of Tampa, Florida. With a BA in Digital Film, he co-wrote and co-directed Scavenger Hunt. His short stories have appeared in various horror anthologies. In 2019 his short script Fertile Blood will be a part of the anthology horror film Slumber Party. He is currently working on his first novel A Dark and Secret Place set to be released in late 2019. Favorite Films: Taxi Driver, Fight Club, I Saw the Devil, The Wild Bunch, Dawn of the Dead, A Clockwork Orange, Pulp Fiction, Heathers, The Monster Squad, and High Fidelity.
Vegas: The Third Season, Volume 1 Battleship