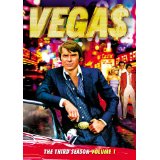 By 1978 the television detective model had been nearly complete and possibly already a cliché. Dan Tanna might have well been the complete model as far as the formula goes. It was almost as if you could go down a checklist and, like Dr. Frankenstein creating a monster, check off the necessary elements. The scripts could then almost write themselves, and you let the show fly on autopilot for three seasons or so until someone decides to look behind the curtain.

So let’s go down that checklist, shall we?

Hot scantily-clad girls? Did I mention this was Vegas? Showgirls galore. Check.

Do something cool with the title like replace an S with a $? Check.

Now you mix that checklist with a surly murder case each week where it seems at times that the detective is in over his head or about to get killed. Throw in some witty one-liners. Top it all off with some car chases and a few fisticuffs, and you have the 1970’s cop/detective series. Vega$ was the poster child for those kinds of shows. While it had all of the action and pieces of the formula going, it never really rose above the crop. Once the formula got old, the series was gone. This was an early series created by Michael Mann, who would go on to bring us such music video style shows like Miami Vice.

You get the first 12 episodes of the third and last season. It all begins with an action-packed two-part episode: Aloha, You’re Dead. Dan is kidnapped by some crooks and taken to Hawaii. They want him to kill a guy so they can take over the gambling operations. Dan has to try to trick them into thinking he’s done the deed long enough to bring them down. Dan stops a burglary by killing the criminal in Sudden Death. But the kid only had an air gun, and now Dan’s guilt compels him to find out what sent this kid on a path with his gun. You know how vacations turn out on these kinds of shows. In Christmas Story, Dan’s on a ski vacation when a young girl shows him her mother’s suicide note. Dan’s kidnapped again in Andreas Addiction. This time it’s a drug addict with a plan for revenge.

Each Vega$ episode is presented in its original television full-frame format. We’re talking about a 40-year-old television show, and your expectations should be adjusted accordingly. While colors are a bit soft, the picture itself is rather clean. The most notable standout is the rather generous level of grain, but this should never be considered a defect, but rather the result of the film’s stock and a legitimate part of the presentation. Print defects are minimal when you consider the age. Black levels are relatively weak but do not seriously take away from the experience.

The Dolby Digital 2.0 track does what it needs to do, nothing less, nothing more. You get to hear the dialog and the energetic and jazzy theme perfectly, even if not in a more modern dynamic presentation. The show never sounded better and is not likely to at any time in the future.

The show had a pretty good run and did fine in the ratings most of its three years on the air. But the show was finally coming to an end on this, the third season. That means just one more release before we wrap these cases up for good. The season was delayed because of a writers’ strike it didn’t start airing until mid-November. But in those days the networks tried to give you full seasons, and the show went into June with new episodes in order to deliver a full 23-episode season. “Just what I wanted.”

Gino Sassani is a member of the Southeastern Film Critic's Association (SEFCA). He is a film and television critic based in Tampa, Florida. He's also the Senior Editor here at Upcomingdiscs. Gino started reviewing films in the early 1990's as a segment of his local television show Focus. He's an award-winning recording artist for Omega Records. Gino is currently working on his 8th album Merchants & Mercenaries. Gino took over Upcomingdiscs Dec 1, 2008. He works out of a home theater he calls The Reel World. Favorite films: The Godfather, The Godfather Part II, The Body Snatcher (Val Lewton film with Karloff and Lugosi, not the pod people film), Unforgiven, Gladiator, The Lion King, Jaws, Son Of Frankenstein, The Good, The Bad And The Ugly, and Monsters, Inc.
Flashpoint: The Fourth Season The Kane Files