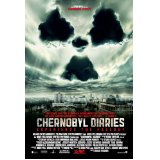 “Aside from the sketchy van situation, if you promise that the tour is safe, I think it could be kinda cool.”

Chernobyl Diaries… so many bad choices to make and so little time. Imagine we are clueless Americans abroad in the Ukraine, so instead of visiting the major metropolitan areas, why not go on a tour of the Pripyat, the ghost town evacuated due to the Chernobyl nuclear power plant meltdown in 1987? Nothing says vacation more than exploring the scene of the worst nuclear disaster in history.

Our tour guide assures us that there will be no danger of radiation poisoning if we keep our visit to the site limited to within a two-hour window. Since we are all riding to and from the location in his decrepit looking van, we don’t have to worry about safe transportation. Don’t let the lack of cell phone reception or the military guard roadblock forbidding any to enter the city stop us, no, let’s just sneak in through a forgotten back gate and hope for the best. Besides, the only thing we have to watch out for is the occasional mutant wildlife attack, because Pripyat has been uninhabited by humans ever since the disaster. But anyone who has seen The Hills Have Eyes knows abandoned radiated property acts like a magnet for mutant cannibal squatters. They might crave your flesh, but mutants know a good deal when they see one… that is if they still have working eyes.

Chernobyl Diaries isn’t a member of the found-footage genre, but it is more of a mutation between found footage and hand-held documentary style shooting. Director Bradley Parker lets the camera become one of the narrative spectators and amps up the creepiness with a twitchy, you-are-there delivery. Keeping the reveals down to just glimpses of the antagonists helps fire up your imagination to fill in the blanks. This proves effective on a number of levels; our eyes play tricks on us like the protagonists’ and this in turn stokes the paranoia, but also saves Parker from having to create a new convincing take on the mutant cannibal look, which probably trimmed a few bucks off the budget as well.

The desolate Hungarian and Serbian locations, with crews shooting on location in Chernobyl, drive up the production values immensely. These shocking urban wastelands stand out as a character in the story. You can feel the actor’s real discomfort working on site of these ultra-creepy locals. Parker lets you fully absorb the surroundings, letting the camera linger on the open doors and windows of the hulking ruins gaping like hungry mouths on a hellish beast. Add to this the threat of radiation poisoning, reinforced with the alarms of a high-tech Geiger counter warning you not to touch anything, and the foreboding settings definitely drive up the ick factor.

There isn’t anything new or breakthrough with Chernobyl Diaries, it is your basic survival horror story. The acting is decent even if the parts are so slightly written as to give them little else to do but to bicker among themselves and act panicked. There is no nudity and little gore or profanity, due to the PG-13 rating. Yet the movie delivers what it promises; shock and dread mount as the story moves into Pripyat. Producer Oren Peli brings his minimalist sensibilities to the picture, demonstrating again that what is unseen, like mutant fish dwelling just below the surface of a poisoned lake, proves more frightening than what we witness with our own eyes. Don’t be afraid to book this extreme tour if you enjoy effective, if ultimately familiar and forgettable, horror movies.