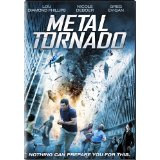 There is something about the disaster film that I can’t resist, and that something is seeing things get destroyed.  I think we all have this in us, where the little Hulk inside us all just wants to smash or see things get smashed.  Thankfully we live in an age where CGI and other special effects can allow us to see all kinds of havoc unleashed from the safety of our living room.   With Metal Tornado in my hands to review I knew what to expect, so I turned off my brain and let the mayhem ensue.

In a small town in Pennsylvania a covert government group is working on the Helios project.  The goal of this experiment is to harness the sun’s energy and create a limitless clean energy.  Everyone on board for the project has the best intentions and are excited when the day finally comes they get to test out their device.  Too bad things don’t go as planned, and though the experiment first seems like a success, with further study they discover some of the energy is missing.  The loose energy becomes a swirling magnetic vortex that sucks up anything metallic that is in its vicinity and is only growing stronger as it makes its way to the ‘City of Brotherly Love’,  Philadelphia.

The setup for this actually isn’t too bad, and for what it’s worth makes more sense than many other blockbuster destruction films that have come out in years past.  But where it does suffer is from the limited budget.  It felt like there were so many missed opportunities here that were missed simply because it wasn’t in the budget.  Don’t get me wrong, there is still a good bit of destruction here, and the filmmakers do their best for some good carnage, one of my favorite bits being a man in his barn and having his tools turn on him.  But I can’t help it, I just wanted more, yeah, call me greedy, but with a title like Metal Tornado and with a DVD with pictures of bridges being destroyed and tornados ripping through a city, I expect to see this doomsday-like carnage.

The cast is a bit forgettable, everyone playing their part as some generic role.  Lou Diamond Phillips was nice to see in the few action bits, but not for a second could I buy that he was some brilliant government scientist, even when he put on the glasses to try to make him look smarter.  The actors knew they weren’t quoting Shakespeare; they knew what kind of movie this was, and for some reason it’s acceptable and simply adds to the campiness of the film.

Overall when you read the title, and for some if you see the trailer, you know what to expect, and if bad sci-fi films are your forte, then this is for you.  It’s a fun and forgettable movie, and it’s not a bad lead-in film for doing a double or triple feature with The Day After Tomorrow and Twister.  But in closing I’ve got to say I was not blown away by Metal Tornado.

Brent Lorentson is a horror writer and film critic based out of Tampa, Florida. With a BA in Digital Film, he co-wrote and co-directed Scavenger Hunt. His short stories have appeared in various horror anthologies. In 2019 his short script Fertile Blood will be a part of the anthology horror film Slumber Party. He is currently working on his first novel A Dark and Secret Place set to be released in late 2019. Favorite Films: Taxi Driver, Fight Club, I Saw the Devil, The Wild Bunch, Dawn of the Dead, A Clockwork Orange, Pulp Fiction, Heathers, The Monster Squad, and High Fidelity.
G.I. Joe Renegades: Season One, Volume One Chernobyl Diaries