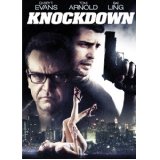 This movie has everything working for it with the exception of one thing, and that is the execution in which the story is told.  The film has a decent cast, a good story, for the most part it looks good on the screen, but what hurts this film was the decision to tell the story in flashback.  How can you have a great payoff at the end if in the very beginning we know how the movie is going to end?  Why the filmmakers stuck with this edit is a mystery to me, and it’s a shame, because they have all the right pieces to make it work, but instead they shoot themselves in the foot.

An up-and-coming boxer Jack “The Ripper” Stemmons (Casey T. Evans) has an undefeated streak to maintain, while he has a match against an opponent that with a victory could lift Jacks status as a boxer to the next level in the pros.  Standing in the way of Jack’s chances for success is a bookie (Tom Arnold) who is out to fix the fight, but Jack has other plans and isn’t ready to take a dive.  When the outcome of the match goes bad, Jack confronts the bookie and is forced to leave the country and go into hiding.  Jack goes on to try to make a life for himself in Bangkok where he takes fights in the Maui Thai underground fighting tournaments.  He meets a prostitute and falls in love with her.  He tries to leave the life of fighting, but it seems too many gangsters see how much money can be made from this exiled boxer.

I don’t know about you, but the story just works for me, but for some reason they got it in their head that we would want to see this start six years later when Jack is a washed up has-been and is confronted by a guy who lost everything because Jack didn’t throw the fight.  This is how the movie should end, not begin.  I don’t want to get into too much spoiler territory, but this confrontation that the two have would have been a great ending, when instead it ends leaving it feeling anticlimactic and wondering what was the point.

Besides this error in editing, Knockdown is a fun little film.  Some of the camera work may bother some; it ranges from stunning to what looks like shoddy surveillance footage.  The drastic quality differences in the footage is something that is bothersome.  The night footage through Bangkok captures the life of the city, and I could watch outtakes of this for hours, but the daytime footage just seemed to blown out at times, and I felt I was watching someone’s home video.  Maybe I’m off the mark, but I think they were going for the washed out look that Tony Scott gives his films, which I do love, but it seems they only nailed it half the time.  Thankfully they had a strong enough story and actors to make up for this.

Overall if you like violent gangster films I’d say give this a shot.  Considering that this was the first film Todd Bellanca directed, I’m curious to see what’s next for him, because I do see some potential in this film.  After all he got Tom Arnold to seem like a badass, and that’s some talent to pull that one off if you ask me.

Brent Lorentson is a horror writer and film critic based out of Tampa, Florida. With a BA in Digital Film, he co-wrote and co-directed Scavenger Hunt. His short stories have appeared in various horror anthologies. In 2019 his short script Fertile Blood will be a part of the anthology horror film Slumber Party. He is currently working on his first novel A Dark and Secret Place set to be released in late 2019. Favorite Films: Taxi Driver, Fight Club, I Saw the Devil, The Wild Bunch, Dawn of the Dead, A Clockwork Orange, Pulp Fiction, Heathers, The Monster Squad, and High Fidelity.
True Blood: Season Four (Blu-Ray) Beyond (Blu-ray)