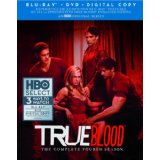 Often in columns, writers are basically forced to do enough research on their own to qualify as experts. But that is not always enough. Sometimes, we are a lot better off if we just consult an expert from the get-go and ask them all of the pertinent questions we need answered. My wife happened to be that expert I needed for the latest season of True Blood, Season Four. Without her, Sookie Stackhouse might just be another girl from the Jersey Shore. Wait, which show am I reviewing again?

What do we need to remember from Season 3, well only two things really. One, Sookie Stackhouse is in Fairyland and two, Bill Compton is the King of Louisiana. Outside of that, we should be able to explain the rest. Let us rejoin the cast of True Blood, shall we?

Rejoining Fairyland, we see a bunch of people being happy and eating fruit. Nom, nom, nom. All of the sudden, we see Sookie Stackhouse (played by Anna Paquin) and her fairy godmother, Claudine (played by Lara Pulver) show up out of thin air. Sookie meets an old friend or two including Grandpa Earl (who died about twenty years ago) (played by Gary Cole). However, she quickly notices that everybody seems to be eating this strange fruit and it has very strange addictive qualities.

Apparently, time is forgotten in Fairyland as twenty years can feel like twenty minutes. Sookie meets Queen Mab (played by Rebecca Wisocky) who immediately wants to know why Sookie is not partaking in the eating of the fruit. Something is up, and Sookie starts to see the fairies as their true selves. This is no Fairyland, this is a land to harvest souls. As Sookie is trying to be force fed some fruit, a chain reaction occurs which puts everybody on a darkened beach.

Sookie and her grandpa Earl run and get some help from Mab’s brother until they reach a hole which looks like a portal. It is supposed to be a gateway home, but only if you have not partaken in the fruit. But it makes no difference as the fairies are still on their tail. Sookie and her grandpa decide to take their chances and jump into the hole. They land back at the real world with a thud, but Grandpa Earl soon vanishes into dust since he ingested the fruit.

Somewhere, vampires Bill Compton (played by Stephen Moyer) and Eric Northman (played by Alexander Skarsgard) wake up (they have both ingested Sookie’s blood so they are aware of her presence). Sookie tries to go to her old house for some well needed rest but quickly finds out that the house no longer belongs to her (it was bought by AIK). As her brother, Jason (played by Ryan Kwanten), now a police officer tells her, even though only a few minutes passed in Sookie’s mind, 12 1/2 months have passed in real time.

Bill rushes up shortly after Jason leaves and tries to talk to Sookie. She is simply not having any of his apologies and needs some real time alone (Bill and her broke up in Season 3). He lets her have some space and leaves. Meanwhile, we join Lafayette (played by Nelsan Ellis) and Jesus (played by Kevin Alejandrop) now a couple who are looking to join a witches’ covenant. There they meet the leader, Marnie Stonebrook (played by Fiona Shaw), a skilled practitioner, especially in the art of necromancy.

In other worlds, Tara (played by Rutina Wesley) now competes in the world of underground cage fighting. She is good at what she does, has a hot lesbian girlfriend, and loves life. At least for now. On to other relationships. Jessica (played by Deborah Ann Woll), a vampire and Hoyt (played by Jim Parrack), a human are still feeling each other out as they have recently moved in together. But Jessica is a warrior as fellow vampire Pamela (played by Kristin Bauer) will tell you and monogamy does not work very well.

Final touches on this soap opera gone vamp include everybody’s favorite shifter, Sam Merlotte (played by Sam Trammell) continuing to feud with his brother Tommy (played by Marshall Allman) and gaining a smoking hot girlfriend, fellow shifter Luna Garza (played by Janina Gavankar). But first, we need to figure out why Jason is suddenly locked into an icebox by a group of were-panthers. Strange things are going on in Bon Temps and they are only going to get worse before they get better.

The major conflict of Season Four is centered on the fallout between Marnie’s covenant and the vampires. Of course, humans, were-wolves, shifters and other assorted species get caught in the crossfire with some interesting results. Again, this season gets high marks because they continue to develop characters and introduce fresh story as well as new actors as needed. Most of the additions are quite welcome, though I was not exactly pleased with a couple of the actors that made their departure by season’s end. But this does happen with every show.

As mentioned previously, I am not the biggest Sookie fan at all. My favorites are Sam, Jessica, and Lafayette. The great thing is that even if Sookie’s latest attempts at a Bill and Eric sandwich (with her in the middle) are a failure, I can at least enjoy it to see what Sam or Lafayette are up to. It is that dynamic that keeps fans coming back episode after episode. Diversion is essential when not everybody cozies up to the main characters.

The only negative I can really find to the season and to the series in general is their consistent need to place a moment of levity or hokiness at the one moment where they should be most serious. I love comedy, and I love the odd sort of humor that can be present in this show. But timing is everything and sometimes in the middle of a very important episode, we get fallout that is often funny on purposely. It seems like the most life or death situations will do their best to get that one true comedic moment. Most fans are used to it, but it still seems a bit jarring at key moments.

The video is presented in 1.78:1 anamorphic widescreen at 1080P. This is my first time seeing True Blood in Blu-Ray and it is excellent but honestly, there is not much difference between Blu-Ray and DVD presentation from a season ago. Color is very well detailed here and we get a wonderful sense of small town life. As expected, we get a good dose of swamps and marshlands but despite the dingy intentions, it feels quite beautiful. High marks all around and some solid video from HBO.

The audio is presented in 5.1 English DTS-HD (French DTS 5.1 and Spanish 2.0 DTS mix also included). A big difference however from True Blood DVD to Blu-Ray is the sound. Dialog is strong and very clear despite the light to medium Cajun accents. Surround effects are more noticeable and the action paces well without being ridiculously abundant. Perfectly complimented soundtrack. Subtitles are especially numerous including English SDH, French, Spanish, Portuguese, Nederland, Dansk, Suomi, Norsk, and Svenska.

Another season wraps up for True Blood. Season five at this point is a go and will be starting in just a couple of weeks with twelve new episodes. It looks as long as Charlaine Harris wants to keep writing books, this series will continue to flourish. It is dripping with sex, violence and intrigue, everything a good HBO series needs to keep its faithful followers. I admit, I might not be a fangbanger but I could think of a lot worse ways to spend a curious night of tv watching.

The blu-ray package is top notch with above average video, great sound and a ton of extras which will appeal to many hardcore fans. This is an easy recommendation but most fans do not need to tell you that. In fact, segue way back to my wonderful wife, she admits that this is perhaps her favorite season yet of the show (who I also thank for a lot of the back information seen here). The show knows how to keep its fans and even introduce a few new ones too. Enjoy.

Episodes
Disc One
She’s Not There
You Smell Like Dinner

Disc Two
If You Love Me, Why Am I Dyin’?
I’m Alive and On Fire
Me and the Devil

Disc Five
And When I Die

Michael Durr has been reviewing movies for the better part of fifteen years now. He primarily enjoys thrillers, sci-fi, animation and even a little courtroom drama. His favorite films include Escape from New York, the Goonies and anything with Alyssa Milano. When he’s not praising Kurt Russell as the greatest actor of our time or scratching his head over a David Lynch flick, he’s spending time at home in Texas with his lovely wife, Lori and his amazing son. How they put up with him is a mystery, but even Basil Rathbone doesn’t have the time to solve that one.
A Necessary Death Knockdown