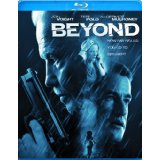 At first glance it would be very easy to say that Beyond doesn’t really offer us anything terribly new in the crime drama genre. For the most part I would tend to agree with that criticism. I would counter with the argument that a very good film doesn’t need to be very original to be good. Sometimes the value in a movie lies in the fact that it does what it does do extremely well. That’s how I would describe the sleeper direct-to-video release Beyond.

Jon Voight stars as Detective John Koski. He’s a detective in Anchorage, Alaska who specializes in missing children. He’s not exactly by the book, and more of his perps end up dead than in the courtroom, but the children usually end up found and alive. Sounds like a win/win to me. Still, he’s haunted by that first case where he wasn’t able to save a little girl. It turns out he’s more haunted by that incident than even he suspects. When 7-year-old Amy (Lesslie) disappears from her bedroom one cold wintry night, Koski, just months from retirement, gets the case. The girl’s mother Sarah (Polo) is the sister of the Chief off Police (Mulroney).

From the setup you can see already that the film contains many of the elements we’ve seen a hundred times, from the troubled cop just about to retire to the list of the usual suspects that enter the picture throughout the film. Then you have a series of supernatural aspects that are also pretty common which include Amy’s “imaginary” friend Rory and the fact that the prime suspect has been dead for three years. All of this ties together with Koski’s troubled memories, of course. I’d be cheating you if I even hinted at the various ways that happens here.

I just love the way director Josef Rusnak handles the film from the beginning to the end. He melds the crime drama and supernatural aspects in the most natural way I think I’ve ever seen. The supernatural stuff is never heavy-handed, and the twists these elements provide actually appear believable. There are wonderful twists that might not be so incredibly surprising but still manage to make the journey interesting enough to keep our attention. The end might not be the big surprise of The Sixth Sense, but it’s as well thought out and fits each step of the film. Rusnak also utilizes his Alaskan locations quite effectively. You get both a sense of vastness and isolation at the same time. It’s a cold environment that adds to the potential peril of the missing girl. They provide wonderfully sweeping transitions throughout and give you the feeling of a grounded place and time. It’s a realistic advantage that also blends flawlessly with both the crime drama and supernatural aspects.

The cast is also quite impressive here. Jon Voight is often underrated because of his outspoken politics and public coverage of his relationship with daughter Angelina Jolie. It’s not deserved at all, and he is as compelling as ever in the role of the troubled detective. Teri Polo stands out as the worrying mother. Dermot Mulroney is the cop with something to hide. Rusnak does a good job with the varying levels of conflict between these characters. Red herrings abound, because so much history is revealed with almost no back-story. Rusnak follows the old axiom that it is best to show instead of tell. There isn’t as much dialog here. It’s a visual experience more than anything else. It’s a journey I strongly urge you to take.

Beyond is presented in its original aspect ratio of 2.40:1. The 1080p image is arrived at with an AVC MPEG-4 codec at an average 30 mbps. This is as clean a picture as you are going to get. The high-definition image presentation is cold and delivers a strong blue palette that contrasts nicely in the snow environs. But this snow is almost never revealed in daylight. The Alaskan vistas are delivered in the further coldness of the still of night. The result is a dark but extremely crisp image that is sharp enough to cut you, if you stand too close.

The Dolby Digital TrueHD 5.1 audio track is delivers an immersive and natural audio presentation. Ambients are usually subtle but add just the right atmosphere to plant you firmly inside the film’s environments. Wind is one of those subtle references that make you just a little more chilly than the settings in your home theater might indicate. There’s a lot of bass, but does tend to be a little muddy instead of the piercing subs I would have wanted. It’s a small complaint, but it does tend to take away from that well-crafted atmosphere I’ve spoken about. The score isn’t anything I’d call dynamic, but it stays out of the way, for the most part. Silence lives here and is used quite efficiently.

Ask me if this is a crime thriller or a supernatural film and I might be hard-pressed to provide you with a satisfactory answer. Rusnak brings the two so intimately together that I’d have to say neither and both. It’s actually a unique blend that I just liked a lot. He’s a director who knows when less is more and how to get naturally good performances out of his cast. It’s seldom these days I actually forget I’m watching a movie, something unreal and imaginary. Rusnak allowed me to live in his world for a while, and I’m grateful. This might be the best movie this year that you haven’t heard of. There’s not a lot of stuff out there by Rusnak, but I’m intrigued enough with his style that I look forward to seeing more of his work down the line. You keep making them, Rusnak, and “I’ll be watching you.”

Gino Sassani is a member of the Southeastern Film Critic's Association (SEFCA). He is a film and television critic based in Tampa, Florida. He's also the Senior Editor here at Upcomingdiscs. Gino started reviewing films in the early 1990's as a segment of his local television show Focus. He's an award-winning recording artist for Omega Records. Gino is currently working on his 8th album Merchants & Mercenaries. Gino took over Upcomingdiscs Dec 1, 2008. He works out of a home theater he calls The Reel World. Favorite films: The Godfather, The Godfather Part II, The Body Snatcher (Val Lewton film with Karloff and Lugosi, not the pod people film), Unforgiven, Gladiator, The Lion King, Jaws, Son Of Frankenstein, The Good, The Bad And The Ugly, and Monsters, Inc.
Knockdown Without a Trace: The Complete Third Season