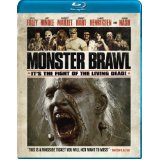 If you happen to be a fan of wrestling and horror films of the 1980’s Jesse Thomas Cook has a two-for-one deal with Monster Brawl. I had the opportunity to chat with him for a few minutes about the new project.

The film features Lance Henriksen, Art Hindle, David Foley, Jimmy Hart and Kevin Nash. 8 classic monsters battle in a PPV style competition in an isolated graveyard. Our review will be along soon. Until then, bang it here to hear my chat with Jesse: Jesse Cook Interview

Gino Sassani is a member of the Southeastern Film Critic's Association (SEFCA). He is a film and television critic based in Tampa, Florida. He's also the Senior Editor here at Upcomingdiscs. Gino started reviewing films in the early 1990's as a segment of his local television show Focus. He's an award-winning recording artist for Omega Records. Gino is currently working on his 8th album Merchants & Mercenaries. Gino took over Upcomingdiscs Dec 1, 2008. He works out of a home theater he calls The Reel World. Favorite films: The Godfather, The Godfather Part II, The Body Snatcher (Val Lewton film with Karloff and Lugosi, not the pod people film), Unforgiven, Gladiator, The Lion King, Jaws, Son Of Frankenstein, The Good, The Bad And The Ugly, and Monsters, Inc.
Workaholics: Seasons 1 & 2 (Blu-ray) Brad Meltzer’s Decoded, Season 2