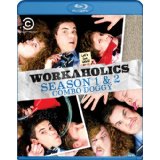 “Ugh. How many times do I have to explain this to you? If you see the neighbor’s house getting broken into, it’s probably Karl high out of his mind thinking he’s locked out of our house.”

When it comes to office based slacker comedies, Mike Judge’s Office Space still sets the gold standard. Workaholics wishes it could be as quotable and timeless as Office Space, but settles for goofy, instantly forgettable juvenile ramblings suitable for a stoner’s short term memory. Much like the boy’s prank of choice, involving a dollar bill wrapped around poop, Workaholics looks good on the surface, but is pretty much the same old crap underneath.

Shamelessly going where The Office, Community, Parks & Recreation, have gone many times before, Workaholics involves the misadventures of Blake (Blake Anderson), Adam (Adam DeVine) and Anders (Anders Holm) three college buds who somehow recently graduated and now share a rental house, an aging red Volvo, and a cubicle at their telemarketing job. Anders is the most balanced, responsible-appearing, and most easily pranked of the three. Blake sports long curly hair and a perpetual shit-eating grin as he avoids life’s obstacles with a stoner’s Zen-like grace. Adam is the most irresponsible, self-centered, and openly narcissistic of the trio, serving as the de facto leader of the pack.

The three are inseparable in a Three Stooges kind of way, constantly on the quest for their next high or distraction from responsibility of any kind. They refuse to grow up, and frankly this level of slackerdom takes true dedication to maintain. Each episode presents another challenge to maintain this shallow and immature lifestyle. Somehow, in spite of the grating, juvenile behavior, you find yourself rooting for these misbehaving man-children. There is no character arc or development, for that would be beside the point. We expect these three to remain a constant, and they work hard to keep this lazy status quo, giving meaning to the title, Workaholics. Sometimes this work is hysterical, sometimes not so much.

Workaholics works better when it is stays within the confines of the workplace. Somehow when the boys’ options are limited the humor feels sharper. Over all the series lacks any real identity. You feel nothing for the main characters other than laughing at their stupidity.  It is almost a cautionary tale against the dangers of drug use, or one could end up as stupid and aimless as these losers. I realize their behavior is over-the-top stupid to get laughs, but there reaches a point where you start losing respect for them because they never learn from their mistakes. These characters are painted with such broad strokes between such narrow lines, there is nothing remotely real about them. They are simply caricatures, buffoons blindly following one empty hedonistic pursuit after another, but maybe there is a reason they call this the slacker generation. Perhaps I’m a little too baby-boomer to get it.

Workaholics: Seasons 1 and 2 is presented on Blu-ray with a MPEG-4 AVC encoded transfer in the show’s original 1.78:1 aspect ratio. Overall it’s a glossy high-definition presentation, if a bit flat. Details are crisp in the better-lit sequences, but a bit murky in the darker scenes. There are times when the image appears somewhat washed out, and other times the sharpness of the colors contrasts the gloom of the workplace. Blacks are a bit soft and unstable, while flesh tones are erratic, ranging from pale to overly warm.

Workaholics: Seasons 1 and 2’s Dolby TrueHD 5.1 lossless soundtrack never really makes full use of the soundfield. There is little by way of immersion in the surround with the exception of some office and street ambience, most of this plays from the front speakers. Hip Hop beats and the score make use of the LFE channel giving the music body and depth. This is a line driven show and the dialog is clearly captured and presented in the center speakers. The balance of music/SFX and dialog is fine, if leaning a bit heavy on the dialog.

Workaholics: Seasons 1 and 2 contains supplements on both of its discs.

At times Workaholics feels like a series of random gags strung together to form the loosest of plots. Naturally those in the twenty-something age range making similar lifestyle choices as Adam, Blake and Anders will find this funnier than the rest of us. I found it a bit redundant and annoying, but this could have much to do with my age as much as my taste in comedy. Lots of sexual and potty humor gags, leading to even more outrageous hedonism. It bills itself as a workplace comedy, but it really is just an excuse for immature men behaving badly and working their asses off to learn none of life’s lessons. Oh my gods, I just became my dad.

“Bitch better have my honey.”