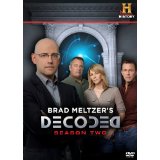 “I’m Brad Meltzer. I’ve spent my life collecting stories. The best include signs, symbols, and coded messages that are hidden in plain sight. Some have become the basis for my novels. But I’ve only scratched the surface of what’s out there, and now History has given me the resources to investigate the rest. This is Decoded.”

What if I told you there was an author out there who was known for writing novels that include historical conspiracies, secret societies and buried treasures, and that this author has found a way to parlay his moderate writing success into a television series for History?

What if I were to tell you that this show promises that on a weekly basis they are going to tackle and solve some of the most intriguing mysteries in America, and that after the 13 episodes of the second season have finally been viewed, you won’t feel any closer to these answers than when you began?

What if I told you that this author would put his name on the show but really not participate in the actual investigations but rather worked as a sort of Charlie’s Angels telephone voice that listened to the team give their reports and pretend to be fascinated by their less than conclusive results?

What if I told you that this History series was available on a  DVD set now out from A&E/History?

Decoded is an obvious attempt to cash in on the National Treasure films and the trend they’ve started. Each week author Brad Meltzer introduces us to a new mystery. He likes to use the word “we” a lot when he talks about each episode’s investigation, but the leg work is really provided by a team that he has assembled for the task. They include:

Buddy Levy: Buddy is a close friend of Meltzer’s, at least that’s what he tells us. He’s the everyman guy on the team meant to represent the audience.

Christine McKinley: Christine is an engineer and math expert. She’s there to provide the scientific approach to the investigation.

Scott Rolle: Scott is a former prosecutor and lawyer. His job is to provide the BS meter. He’s apparently used to being lied to and is there to dig out the facts when talking to witnesses.

Each episode begins with a premise, and the team goes to related locations to talk to potential informants. They also dig through archives and even try to break into the property of secret societies. They love the whole secret society deal and overplay it at every turn. Meanwhile Meltzer breaks in from time to time and delivers an obviously scripted reaction and summation of what’s been uncovered so far. Unfortunately, they don’t solve any of the mysteries, and this show plays out more like those ghost-chaser shows where someone says “Did you see that?” and you look at the television shaking your head thinking, “See what?”

Episodes explore such things as the lance that pierced the side of Christ. The team visits several places that claim to have the original lance. It appears Hitler once may have had it, believing that it would make him invulnerable. We all know how that worked out. They follow the possibility that Billy The Kid actually lived to a ripe old age. There’s an episode on Roswell where the team actually drives up to the gates of Area 51. They examine the possibility that there’s no more gold left in Fort Knox. We all knew the country was broke, but I didn’t know we might be that broke. Of course they deal with the treasure hunt connected with the Declaration of Independence. Since National Treasure pretty much set the stage for this show to exist, this one was a natural, as was an episode on Leonardo DaVinci and some proposed prophesy connected with 2012, which also gets its own episode this season. Was Mount Rushmore a KKK racist monument? Was George Patton murdered? Is the mob still alive and well? These are some of the other questions that don’t really get answered this season.

Each episode is presented in its original aspect ratio of 1.78:1. Understand that this is documentary television. The footage looks pretty natural, but it’s not intended to blow the doors off your system.

The Dolby Digital 2.0 track serves the dialog, nothing more.

I still think Meltzer needs to hire me for next season. The questions are all quite interesting, but none of the shows leave me with any satisfaction. They pretty much go nowhere at all. There needs to be more of an evidence-based investigation with some solid evaluation. Even the evidence they act like moves them doesn’t really stand up. So, this one goes out to Brad. I’m available. “I hope you’re paying attention.”

Gino Sassani is a member of the Southeastern Film Critic's Association (SEFCA). He is a film and television critic based in Tampa, Florida. He's also the Senior Editor here at Upcomingdiscs. Gino started reviewing films in the early 1990's as a segment of his local television show Focus. He's an award-winning recording artist for Omega Records. Gino is currently working on his 8th album Merchants & Mercenaries. Gino took over Upcomingdiscs Dec 1, 2008. He works out of a home theater he calls The Reel World. Favorite films: The Godfather, The Godfather Part II, The Body Snatcher (Val Lewton film with Karloff and Lugosi, not the pod people film), Unforgiven, Gladiator, The Lion King, Jaws, Son Of Frankenstein, The Good, The Bad And The Ugly, and Monsters, Inc.
Interview With Monster Brawl’s Director/Writer Jesse Thomas Cook Pawn Stars: Volume 4