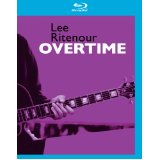 Since the age of 15 jazz guitarist Lee Ritenour has been strumming his Gibson guitar with The Mommas  & The Papas and even doing some guitar work for Pink Floyd’s the Wall ‘’Run like Hell” track.  It was during his time with the Mommas & The Poppas that he was given the name “Captain Fingers” which would also later go on to be the name for one of his more successful albums.   In 2010 after fifty years of performing, Guitar Player Magazine awarded Ritenour a lifetime achievement award, that same year his new album which he produced Lee Ritenour’s 6 String Theory received several accolades from the music community.

Back in 2004 Ritenour put together a project that would try to encompass the work he had done over the years.  To do this he brought in other musicians of the various styles he had played in to come together and record live with an audience; this project was called Overtime.

Instead of getting your typical concert performance, the route Ritenour went with instead is more of an intimate jam session where the band played together in a circle to one another rather than the traditional route where they face the audience.  The decision to go this route seems to of paid off, because as you watch these players together you can see how they are feeding off one another and really having a good time playing together.  It reminded me of the old unplugged concerts VH1 used to put together with the mood lighting and it feeling like a more personal experience.

Papa Was a Rolling Stone

She Walks This Earth

For me personally this was a hard show to get into since jazz really isn’t what I listen to.  But by about the mid-point I found myself getting into this a little more and by the end I realized I actually enjoyed it.  The talent gathered here is really incredible.  When Dave Grusin breaks out in his piano solos he is heaven to the ears, and he makes it look so easy.   Even if jazz is not your thing, but you at least appreciate music, there is a lot to enjoy here.  At some point every member of the group has a moment (mostly during solos) where you get to see them let the music guide them as though it were all improvised, and with the quality of the sound you feel like you are right there and wanting to applaud them.

The Band Members are

Through the performance we get short breaks where we are shown snippets of interviews done by the band.  This is where I wish we had a little more depth and got more of a history with each of them.  Towards the end there is a point where they discuss the connection they have to the music and each other; it was just something I wanted to hear more of.  Later they also get into how they would like the music to reach a younger audience and possibly inspire them to become musicians as well.  Seeing people talk like this about music struck me because they weren’t giving the canned answer you would hear on some talk show or it be about the fans, they genuinely do this for the love of what they do.

With the feature performance clocking in just over 2 ½ hours there is a lot of music here for the fans to digest.  This is just right for when you want a nice chill night and just relax or to put the kids to sleep (use at your own discretion).  Fans I’m sure will enjoy this considering I knew nothing about the guy when I first viewed this, and now I’ve been surfing the web to hear a little more if what Captain Fingers has to offer.  Is it the best show I’ve seen? Not at all, but I did come away with a lot of respect for the man and his fellow band members.

Brent Lorentson is a horror writer and film critic based out of Tampa, Florida. With a BA in Digital Film, he co-wrote and co-directed Scavenger Hunt. His short stories have appeared in various horror anthologies. In 2019 his short script Fertile Blood will be a part of the anthology horror film Slumber Party. He is currently working on his first novel A Dark and Secret Place set to be released in late 2019. Favorite Films: Taxi Driver, Fight Club, I Saw the Devil, The Wild Bunch, Dawn of the Dead, A Clockwork Orange, Pulp Fiction, Heathers, The Monster Squad, and High Fidelity.
A Thousand Words (Blu Ray) The Raconteurs: Live at Montreux 2008 (Blu-ray)