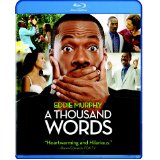 Take the supernatural comedy of Groundhog Day, merge it with the in-your-face ultra awkwardness of HBO’s comedy Extras, then shave away all that stuff I said about “comedy” and you have this film. Oh yes, this film follows the formula of a Comedy, but has none of the fun implied in such a label.

Eddie Murphy plays a successful Book agent named Jack McCall, who makes his living by the way he can spin his words. There is a running gag that he represents authors and yet does not take the time to actually read books for he’s too busy talking…but it’s about as humorous and the sentence I wrote describing it just now. When McCall tries to reel in a religious guru to sign with his agency, he is soon cursed (or blessed, depending on whether you’ve guessed there’s a happy ending by now or not) with a tree that holds a thousand leaves (mind you, this is not the actual amount but a random guess made at one point), which represent a thousand words McCall speaks. Each time he says a word, a leaf falls off of the tree. What happens to a tree after it loses it’s leaves? To a Californian, it is dead…to me (as a Canadian) it simply means it is winter….but here I am trying to be funny when I’ve got a gosh darn Eddie Murphy film to talk about!

So, hijinx ensue as McCall tries to survive 3 days, which is the relatively arbitrary amount of time he’s waiting for the guru to come back to America after leaving to consult with other’s about this tree fiasco. Eddie Murphy’s performancecould have been interchanged with just about any Hollywood actor. If this film starred Tim Allen, it’d be less dynamic. If it was Will Ferrel, he’d scream more. If it was Jim Carrey, he’d fall down more…you get the idea. Murphy doesn’t add anything special to scenes of mugging and playing awful charades while being frustrated at Starbucks or instances where whatever happens to the tree happens to McCall; a rule created simply for it’s comic potential, and yet only utilized in such painfully dull moments as McCall “accidentally getting high” while the tree gets sprayed with pesticide.

Along with trying to save his own life, McCall is learning more about the people around him. Is this because he has learned to be a better listener? No…it’s just that he is the only person not-talking amongst a world where NOBODY knows how or when to shut up. McCall must fix his marriage, resolve issues about his parents, and get in touch with his underlings and coworkers. Good grief, the memory of these moments is sapping the will to live out of me…so I shall leave this review with a fortune cookie: If a leaf falls near Eddie Murphy, and he can’t say a damn word about it…does it still rake in 7 figures at the box office opening weekend? Clear your mind of all doubts.

Widescreen 1.78:1. Whether it deserves it or not, this film received a very lovely looking transfer to HD. There are some nice exterior shots that are able to highlight some lovely greens (of leaves of course).

English 5.1 DTS-HD Master Audio, along with French, Portugese and Spanish 5.1 Dolby Digital are all available. The music is just as forgetable as the rest of the film, but what is there has been transferred very carefully to Blu Ray.

I can’t recommend this to anyone. Not only is it a bad film, but there is a surprising amount of unneeded foul language, so even children can’t sit through it. A waste of time and words.