The Raconteurs: Live at Montreux 2008 (Blu-ray) 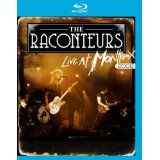 The Raconteurs were formed in Detroit in 2005 by Jack White, formerly of The White Stripes; he pulled together artists Brendan Benson, Patrick Keeler and Jack Lawrence, who were formerly with the Cincinnati garage rock band, The Greenhornes to create the radio friendly garage band, The Raconteurs. Pulling from the roots of rock and roll with a raw, gutsy sound, they immediately scored with their debut album, Broken Boy Soldiers, which went to number two in the U.K. and made the top 10 on Billboard’s album chart in the U.S. In 2008, the band played one of the premier musical festivals, the Montreux Jazz Festival in support of their second album, Consolers of the Lonely. The concert was captured on video and is The Raconteurs’ first live recording and official video released by the band.

To enjoy the garage band sound, one must be ready for rough and unpolished rock and roll. The Raconteurs: Live at Montreux 2008 is about as rough and unpolished as it gets. I realize this is going to sound like blasphemy to fans of Jack White and the band, but the concert sounds so raw it seems as if they didn’t even practice for the set. Harmonies are way off, guitars crazy out of sync, voices cracking and croaking off key, even the rhythm of the percussion is unsteady at times. This is not helped by a terrible live mix which at times buries the vocals and other times highlights them to the point of crushing the backing instruments.

Some rock purists love the under-produced sounds of garage bands, thriving on the flaws of the band, and I am sure they will love this concert. However, if you are a fan of the band’s studio recordings (I love both albums, Broken Boy Soldiers and Consolers of the Lonely), you might be frustrated by the sloppy live interpretations of the songs; I know I was. The best performances of the concert were “You Don’t Understand Me, ” “Rich Kid Blues,” “Steady as She Goes,” “Many Shades of Black,” and “Broken Boy Soldier.”

The set is made up of songs from the first two albums, all written by Brendan Benson and Jack White, except for “Rich Kid Blues” written by Terry Reid, and the sly, delightful “Keep It Clean,” which is a traditional song associated with Charley Jordan originally.

The track list for The Raconteurs: Live at Montreux 2008 contains 10 of the 14 songs from Consolers of the Lonely, and five of the 10 tunes on 2006?s Broken Boy Soldiers. All in all only nine of the 24 tracks that make up the group’s studio output are missing from the concert film.

The Raconteurs: Live at Montreux 2008 is presented in a MPEG-4 AVC-encoded 1080i transfer in its original aspect ratio of 1.78:1. Although details are sharp, the overall presentation is a bit flat. Blacks are crushed and skintone is erratic due to the stage lighting most of all. Colors are vivid if a bit oversaturated at times. The video did not suffer any artifacting, banding, aliasing, or other digital distractions. The overall flatness was likely due to the source cameras.

The Raconteurs: Live at Montreux 2008 audio is offered in three options: 5.1 DTS-HD Master Audio, Dolby Digital 5.1, and LPCM 2.0 stereo. The biggest problem I had with these tracks was due to the poor live mix which did the band no favors. The surround was surprisingly immersive, placing us firmly in the audience to enjoy their reactions and the LFE channel fires up to highlight the pounding riffs of bassist Jack Lawrence and drummer Patrick Keeler.

There were no special features on this release.

If you are a diehard Jack White or Raconteurs fan you may enjoy The Raconteurs: Live at Montreux 2008, as it is their only video and live recording to date. But if you liked the hits off the radio and want to see a show that captures the production values of the singles, you will likely be disappointed. Although the performance is energetic, there is very little interaction with the audience and the band never looks like they are enjoying themselves. I can only imagine this is due to knowing how crappy the set sounded as they played. The Raconteurs: Live at Montreux 2008 is recommended only for extreme fans and garage band apologists.