You’re Nobody Till Somebody Kills You 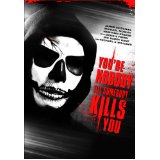 A serial killer is on the loose in New York dispatching up-and-coming hip hop artists.  Is it a feud between rappers, a crazed fan, or is it all part of a conspiracy connecting all the homicides involving rappers reaching back to the days of Tupac and the Notorious BIG?  Chances are if you’re anything like me you couldn’t care less.  I take rappers about as seriously as Carrot Top, and I’m willing to wager it’s Carrot that has more talent.  But people still enjoy the music, and as long as the fans are happy that’s all that matters.

It doesn’t take long to figure out who the killer is, but what does seem to drag through this film is the reason why the murders are taking place to begin with.  As the investigation of the murders goes on, our lead detectives Johnson (James McDaniel) and Francelli (Michael Mosley) explore the many avenues that lead to why the hip hop scene is how it is.  The murders create buzz which raises the sales of albums, so it’s made clear that violence between artists is more than welcomed by the record companies.  Even the hip hop magazines stand to make a profit when they manage to release an article or the last interview with a fallen artist.

I believe the film wanted to have more depth and scope than what the end product turned out to be.  But due to having a limited budget, some compromises had to be made.  When the kills come along, there isn’t much on screen violence and even less blood, which had it seem even less like of a horror film.  The biggest problem with the film is that it doesn’t seem to know what it wants to be, and the end result is a bit of a mess.

Where there is no excuse for writer and director Michael A. Pinckney is in the script.  Sure I’ve said this many times before about films, but the fact is without a strong script as your foundation, every compromise the filmmaker has to make effects the outcome of the film.  And considering Spike Lee was executive producer and Pinckney has worked with Lee before, I would think there had to be some discussion about the quality of the script and how every character is one-dimensional.  I’m a fan of Lee; I feel he’s one of the most important directors, especially in relation to independent cinema.  But I’m just surprised he’s OK with having his name on this, because love him or hate him, he puts out quality work  for his fans, and this is just not up to par for what fans should expect.

By the time the story is wrapping up and the killer is revealed along with the motive, it’s hard to care about the outcome.   I just can’t recommend this movie in any way.  It’s not even campy enough to manage to be so bad it’s good.  If you’re fans of New York rap and you really just can’t resist, then don’t say I didn’t warn you.

Brent Lorentson is a horror writer and film critic based out of Tampa, Florida. With a BA in Digital Film, he co-wrote and co-directed Scavenger Hunt. His short stories have appeared in various horror anthologies. In 2019 his short script Fertile Blood will be a part of the anthology horror film Slumber Party. He is currently working on his first novel A Dark and Secret Place set to be released in late 2019. Favorite Films: Taxi Driver, Fight Club, I Saw the Devil, The Wild Bunch, Dawn of the Dead, A Clockwork Orange, Pulp Fiction, Heathers, The Monster Squad, and High Fidelity.
Storage Wars: Volume 3 Streets of San Francisco: Season Three (Vol 1 & 2)