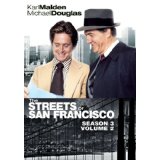 If you weren’t around in the 1970’s, you might be surprised to find out that film superstar Michael Douglas was once in a television cop show. It was this influential crime drama that allowed Douglas to show off the acting chops that would earn him a spot in the Hollywood elite for decades to come. It didn’t hurt any that he was able to team up with Karl Malden, an undervalued talent in his own right. The two of them literally bring the show to life.  The series was run by Quinn Martin, himself no stranger to groundbreaking television. Martin was the same talent who created the crime drama with The Untouchables. His uncanny ability to come up with a clever premise was responsible for such milestones in television history as The Invaders and The Fugitive. Later he would continue to shape the look of television with shows like Tales Of The Unexpected, The FBI, and Most Wanted. He was the Steven Bochco of his time. Long before NYPD Blue, Martin was able to make San Francisco, the city itself, an iatrical character for Malden and Douglas to interact with. The show had tremendous style, even if the cases were purely formula. Certainly you won’t find anything in these plots you haven’t seen a hundred times before. What you will find is a unique presentation that somehow makes even the most mundane story appear quite compelling. If you enjoy the Bochco and Wolf dramas or fall in with such classics as Starsky and Hutch or Miami Vice, you owe a tremendous debt to Martin for setting the table for all of those fantastic meals that would follow.

Inspectors 81 are back on the tough streets of San Francisco for a third season of gritty police work. Remember, these are the same streets Dirty Harry worked during the same decade. There are some memorable moments in this next half season release of “Streets”.

In case you don’t know the show, here’s a rundown. Detective “Iron” Mike Stone (Karl Malden) is a seasoned veteran of the San Francisco Police Department. He’s an old-fashioned, no nonsense detective whose life has taken some bitter turns of late. Much to his aggravation, he gets partnered with Keller (Michael Douglas), a green detective who hasn’t lost his belief that he can make a difference. Together they just might be able to teach each other something. Before long the two develop a teacher/mentor relationship that works well enough to solve the cases and get the bad guys.

The third season certainly has its share of interesting cases. The season starts with the detectives investigating one of their own in One Last Shot. When a cop is killed, his partner’s story just doesn’t add up. Is it a case of a dirty cop, or is he covering up his own mistake? The Most Deadly Species has the detectives after a hit-woman. The show ventured into the then-hot topic of the Vietnam War and the protests. Keller infiltrates a group to catch the killer of a marine in I Ain’t Marchin’ No Anymore. Terrorists take Keller hostage in Flags Of Terror. Keller goes undercover at a mental hospital in shades of One Flew Over The Cuckoo’s Nest which Michael Douglas produced. That story’s called Asylum. While Keller is in the hospital after getting shot, Stone is teamed with another young detective who might be part of the crime they’re investigating in the season-ending episode Solitaire.

The sets are still released in half seasons, but Paramount has stepped it up and released both halves at the same time. Buy both sets and you get 23 episodes on 6 discs. If you don’t take advantage of a deal like that, “Just between you and me—you’re crazy!”

Gino Sassani is a member of the Southeastern Film Critic's Association (SEFCA). He is a film and television critic based in Tampa, Florida. He's also the Senior Editor here at Upcomingdiscs. Gino started reviewing films in the early 1990's as a segment of his local television show Focus. He's an award-winning recording artist for Omega Records. Gino is currently working on his 8th album Merchants & Mercenaries. Gino took over Upcomingdiscs Dec 1, 2008. He works out of a home theater he calls The Reel World. Favorite films: The Godfather, The Godfather Part II, The Body Snatcher (Val Lewton film with Karloff and Lugosi, not the pod people film), Unforgiven, Gladiator, The Lion King, Jaws, Son Of Frankenstein, The Good, The Bad And The Ugly, and Monsters, Inc.
You’re Nobody Till Somebody Kills You Mannix: The Seventh Season