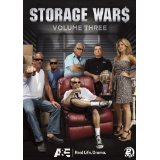 One of my favorite television pastimes is watching some Storage Wars episodes. Initially, it was the lure of finding that goldmine buried beneath a pile of trash in a storage locker. But as I got more into it, I realized that it was the people who kept me coming back episode after episode. Barry, Jarrod, Brandi (she is a cutie), Darrell and even occasionally Hester all intrigue me as I watch each episode. Here in my hands is Volume 3, let’s see if the viewing pleasure continues.

If you need to learn about the Storage Wars regulars, you can check out my Volume 2 review at http://upcomingdiscs.com/2012/02/19/storage-wars-volume-2/.

Volume 3 of Storage Wars is sixteen episodes from Season 2 that takes from the 15th up to the 30th episode of that season. This is the season where I think the show really starts to hit its stride and the viewer really started to feel an affinity with the characters (especially if you have watched as much as I have). But enough about how I feel about the show, let us look at a few of the more interesting episodes.

In Driving Miss Barry we are off to Westminster, CA. Here among the auctions, we watch Brandi go out on her own by paying over $6,000 to buy some quads (think ATVs) much to the dismay of Jarrod. The interesting thing about this auction is that they never mention the really awesome looking pinball machine in the back. But let’s just say the quads do go for a pretty penny. The highlight of the episode however is watching Barry drive his mom around trying to find a specific appraiser for his facial device. (The woman has no idea how to be quiet)

Stairway to Hemet goes to the town of Hemet, CA which apparently nobody really knows where the heck it is. Somehow, they all still get there and we are introduced to the infamous YUUUUUUPPP! Hat (a present from Barry to Dave Hester so he doesn’t have to hear the phrase anymore, but it doesn’t work). Dave scores a massive 20×20 room and Jarrod finds some tribal body art tools. The most interesting auction this time around belongs to Darrell who finds a rather awesome musical instrument.

Moving on to The Drone Wars which is out of Gardena, CA, we get perhaps the most infamous incident of the set. Barry along with one of his good friends, Kenny Rogers Jr. have designed a drone ship that go into storage lockers and give them an aerial view of the contents. Of course, this does not go well. Darrell again scores one of the best lockers of the entire season where he pays 7,000 for a locker but it ends crapping out huge amounts of cash with the numerous building supplies contained within.

In that episode as well, we have a guest star, Nabila Haniss (who has some infamy for supposedly getting a locker that Paris Hilton had). She also shows up in Hook Line and Sucker where Nabila finds an old musket rather than a Gucchi bag. The most interesting unit here goes to Barry who gets suckered into a $320 unit by Dave. However, Barry is the one with the last laugh when he finds some etchings of a famous horse racing park.

One of the continuing stories in this line of episodes is the expansion of Jarrod and Brandi’s shop into an adjoining space thus increasing their selling area and being able to serve both types of customers, the casual small cash customers and the more lucrative hard core ones. We are also introduced to Jarrod’s own clothing line in Outlaw Apparel and one really has to stop and smile for these two. In the first season, they really were rookies, but now both of them have made it of sorts and you see better things for them going forward. I just hope that the arguments and bickering die down a bit.

As mentioned, this is where the show starts to hit its stride. This show offers a lot of viewing pleasure and the colorful assortment of characters provide some intriguing moments. My wife and I am a complete sucker for Barry, the eccentric millionaire who shows up in the most amazing cars anybody could dream of. Sure, he has the biggest bankroll, but the style he puts into his bizarre ideas and colorful banter is really what makes the show so bloody amazing. He might be the most interesting man in storage auctions today.

The video is in 1.78:1 anamorphic widescreen presentation. This show is filmed in High definition and does a great job of providing quality video. Flesh tones are highly accurate and despite the fact that they might be filming in a dark storage locker or a claustrophobic expert’s shop, it looks relatively the same. The viewer is able to see lots of detail and we might spend time looking at other items in the background and not necessarily what is being discussed in front of us. Entertaining video to say the least.

For the audio portion, we get a 2.0 Dolby Digital Stereo track in English. The audio track is a little less desirable. Dialog is clear and one can appreciate this fact if they check out the two auctioneers, Dan and Laura. One can actually understand what they are saying, for the most part. None of the characters in the show sound muffled even when they are digging in the back of a storage closet. Sound effects are few and if they do appear they stay in the center channel. English and Spanish subtitles are provided.

Storage Wars is now entering its third season. Dave Hester has been somewhat absent from a few of the early episodes and has been replaced by Jeff Jarred whose main gimmick seems to be how many times he can claim that the auctioneer Dan Dotson is merely playing favorites. He’s good at what he does but I just do not see him as a suitable replacement for Dave in the long run. Anyway, Volume 3 of Storage Wars should be a good fix of Dave, Brandi, Jarrod, Darrell and Barry if you have not watched the show in a little while.

The discs are about the same quality as Volume 2 with above average video and audio. This time around they even include a decent extra which I hope is the trend for future discs. Can we please get some commentaries or additional extended interviews? Surely, they watch themselves from time to time. I would. Anyway, I give this a heavy recommendation. This is great television and I really hope it stays around for years to come. Sold!

Disc Two
Smoke ‘Em if You Find ‘Em
The Drone Wars
Brandi’s First Time
Horray for Holly-Weird
Don’t Bid So Close to Me
Not Your Average Bear
Hook, Line and Sucker
Operation Hobo

Michael Durr has been reviewing movies for the better part of fifteen years now. He primarily enjoys thrillers, sci-fi, animation and even a little courtroom drama. His favorite films include Escape from New York, the Goonies and anything with Alyssa Milano. When he’s not praising Kurt Russell as the greatest actor of our time or scratching his head over a David Lynch flick, he’s spending time at home in Texas with his lovely wife, Lori and his amazing son. How they put up with him is a mystery, but even Basil Rathbone doesn’t have the time to solve that one.
G.I. Joe Series 2: Season 2 You’re Nobody Till Somebody Kills You