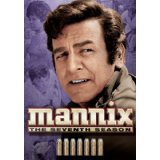 It sounds like nothing new. Hard-boiled detective uses computers and other forms of technology to solve cases. It isn’t anything new, except the detective in question is Joe Mannix, and the series started in 1967. The computer that Mannix used took up an entire room and was queried using cardboard punch cards. This wasn’t science fiction. We’re not talking some newly-discovered Irwin Allen series. Mannix didn’t go after aliens or robots. This was a down-to-earth gritty detective show. Mike Connors played the tough-as-nails detective. He was perfect for the part and blended into the role seamlessly for eight years.

The show was created by the team of Link and Levinson, who later gave us the detective in the rumpled raincoat, Columbo. It was groundbreaking in so many areas. While it might not be remembered today as one of the top detective shows, there can be no argument about the impact Mannix had on the genre. A decade later one of my favorite television detectives, Jim Rockford, would borrow rather heavily from Mannix. Like Rockford, Mannix was getting beat up a lot. They both had the same sense of style, wearing rather ugly sport jackets. Neither was afraid to bend the rules, or the law, when necessary. Again like Rockford, Mannix often falls for the wrong girl at the wrong time. Mannix was good with a gun and equally adept with his fists. The show received a ton of controversy from the start for the amount of violence it employed. Tame by today’s standards, Mannix was quite aggressive for its time. The joke was that the show’s producers mandated a fight or car chase every 15 minutes whether it was needed or not. I’m sure that wasn’t true, but nonetheless the show opened the floodgates for the detective shows that followed. In this first season, Mannix worked for the enigmatic detective agency, Intertect. They supplied him with the latest in modern technology and with his cases. His main company contact was Lou Wickersham, played by Joseph Campanella. Now Mannix is on his own and begins to resemble more and more these detectives that would eventually follow in his tire tracks.

The seventh season would feature some classic episodes of the series. The season begins with The Girl In The Polka Dot Dress. A psychic’s visions are coming true, and it leads skeptical Mannix in search of a mysterious girl in trouble. In Little Lost Girl Mannix pretends to be a shrink to try to pry crucial information out of a girl who is a head case. This case is a cross-over episode with Diagnosis Murder many years later with several cast members showing up for that episode. When a street gang takes note of how tough Mannix is, they decide to kill him as a display of strength to a rival gang in The Gang’s All Here. Mannix is looking for a little down-time to go fishing in Silent Target, but when his ride breaks down he finds himself going against professional hit-men instead. In The Dark Hours, Mannix has been shot, and now he must try and get his memory back before the killer finishes the job with his own gun. In the season finale The Ragged Edge, Mannix appears to be a junkie willing to do a hit.

It’s the next to last season for Mannix, and the cases get a lot more personal in the 7th year. The show has moved a long way from the firm detective Mannix started out as. You see a lot ore of future guys like Rockford and Magnum by this season. The show actually got better and is worth a check, if you haven’t already. There are 24 episodes on 6 discs. “Sounds like a pretty good deal to me.”

Gino Sassani is a member of the Southeastern Film Critic's Association (SEFCA). He is a film and television critic based in Tampa, Florida. He's also the Senior Editor here at Upcomingdiscs. Gino started reviewing films in the early 1990's as a segment of his local television show Focus. He's an award-winning recording artist for Omega Records. Gino is currently working on his 8th album Merchants & Mercenaries. Gino took over Upcomingdiscs Dec 1, 2008. He works out of a home theater he calls The Reel World. Favorite films: The Godfather, The Godfather Part II, The Body Snatcher (Val Lewton film with Karloff and Lugosi, not the pod people film), Unforgiven, Gladiator, The Lion King, Jaws, Son Of Frankenstein, The Good, The Bad And The Ugly, and Monsters, Inc.
Streets of San Francisco: Season Three (Vol 1 & 2) American Reunion: Unrated (Blu-ray)