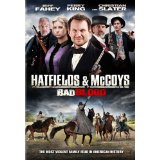 Just to forewarn you this is not a review for the mini-series that aired on the History channel with Kevin Costner and Bill Paxton.  Instead this is for the bad knockoff that seems to have been released just in time to catch any spillover interest from the Costner version.  So how does this version of the battle between the two feuding families hold up?  Well, not so good, and I’m being generous in saying that.

Taking into consideration this production had nowhere near the budget of the History Channel version, it does what it can to try to pull off this epic tale of love and revenge.  But being ambitious is not enough to make up for everything a retelling of the Hatfield and McCoy story this film is lacking.  Just because you have a limited budget doesn’t mean you can’t pull off a great western; A Fist Full of Dollars and the original Django come to mind as being great iconic westerns done on shoestring budgets for the time.  And those movies are pretty ambitious when you look back at them, and being a little more current El Mariachi (though a modern western) was another micro-budget film filled with gunplay and a story heavy on revenge but effective on using  the most out every dollar and location at hand. I just point this out since just because a film doesn’t have a large budget they shouldn’t be let off the hook for not stepping up to the plate and delivering the film they set out to make.

The smart move the filmmakers made here was spending a fair amount of time on the brewing romance between  Johnse Hatfield (Sean Flynn) and Rosanna McCoy (Kassandra Clementi).  The story of these two kids falling in love while their families are killing one another is where the real drama is, and if this romance was all the film was about it would have helped a lot, but there is no use playing armchair director at this point.  But the fact they went with these two and letting us watch as they choose one another and plan to leave their families and all the bloodshed out of love made it easier to look past many of the faults with this film.  Flynn and Clementi manage to make their sometimes dreadful lines bearable, and their relationship was mostly what kept me going with this film.

As for the rest of the film, well, it’s a mess.  We get mostly a lot of the families talking amongst their kin about how bad the other family is and how they need to attack or kill before the others attack them.  We never get a chance to full appreciate the hostility between the two families or see how their blood feud could lead Kentucky and West Virginia to war with one another.

Christian Slater takes on the role of Governor Bramlette who is trying to keep the peace as his state is under martial law.  He does fine here, but really just has nothing to work with; he simply gets to bark a few orders and smoke a cigar.  This was a guy that used to be a box office draw, and now he’s stuck doing this, but at least he’s not doing a sequel to Kuffs .  At least we have that to be thankful for.  As the heads of the rival families we have Jeff Fahey (Lost) as Devil Anse Hatfield and Perry King as Ran’l McCoy.  They make do with what they are given, but there are no moments where they are given a chance to shine, and considering they are the heads of their families at war, well, that’s a bit of a problem.

Some of the cinematography makes up where the set design falls short.  I’ve always felt a shot in the woods is always far more interesting than a shot in a closed space.  But a few well-done shots can do only so much for you.   And I can’t finish this without noting the score; never has crossing a tiny creek felt overly dramatic or traveling a few yards on horseback seemed so intense that it induced a mild fit of giggles.  The poor choice of music cues in this just made it all the more difficult to take the movie seriously.  It’s just one of those instances less would have been more in helping maintain a tone here, because really it’s not as bad as I had expected this to be.  But for those curious about the story or history of the Hatfields and McCoys, I’d hold out for the History Channel version.

Brent Lorentson is a horror writer and film critic based out of Tampa, Florida. With a BA in Digital Film, he co-wrote and co-directed Scavenger Hunt. His short stories have appeared in various horror anthologies. In 2019 his short script Fertile Blood will be a part of the anthology horror film Slumber Party. He is currently working on his first novel A Dark and Secret Place set to be released in late 2019. Favorite Films: Taxi Driver, Fight Club, I Saw the Devil, The Wild Bunch, Dawn of the Dead, A Clockwork Orange, Pulp Fiction, Heathers, The Monster Squad, and High Fidelity.
The Miracle Match – White Squall – Prefontaine Home on the Range (Blu-ray)