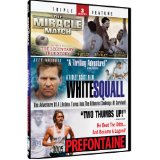 In ranking the popularity of sports in America, there’s football and then there’s everything else. The hierarchy for sports movies, however, is a little more competitive. I’ve got boxing edging out baseball for the top spot due to two Best Picture wins (Rocky, Million Dollar Baby) that should’ve been three (Raging Bull), and the fact that even a recent movie like The Fighter can bank almost $100 million at the domestic box office while snagging a couple of Oscars despite boxing’s profile currently being in the toilet in this country. Boxing and baseball are probably followed by football, hockey and basketball, in some order. You’ll have to go further down the list to find soccer, sailing and long-distance running, the three sports covered in this DVD triple feature.

The Miracle Match, known as The Game of Their Lives when it was released in 2005, tells the story of the 1950 U.S. national soccer squad that defeated a heavily-favored team from England — the country that invented the sport — during the World Cup in Brazil. Since soccer wasn’t exactly a top priority at the time, the American team was put together 10 days before the World Cup and was comprised of recreational players. The film mostly focuses on a group from The Hill — an Italian immigrant community in St. Louis — led by goalie Frank Borghi (Gerard Butler).

Director David Anspaugh (Hoosiers, Rudy) certainly knows his way around an inspirational sports movie. As a result, the lovingly filmed soccer matches — in addition to the constant slo-mo, these contests must’ve taken place during a time before everyone in the sport universally decided to flop all the time — are accompanied by the sort of rousing musical score designed to give you chills. (Hey, people keep using that sort of music because it works.) What doesn’t work quite as well is a present-day framing device featuring a sports reporter (Patrick Stewart) recounting the Team U.S.A. story. Not only is it completely unnecessary, but it doesn’t fully make sense because the reporter (played in the 1950s scenes by Terry Kinney) wouldn’t be privy to all the major and minor conflicts each team member experienced. Oh well, at least we still get to hear Patrick Stewart narrate.

More importantly, there’s no strong central performance that anchors the film the way someone like Kurt Russell did in Miracle. (A movie with very similar themes.) Butler and, particularly, Wes Bentley (as structured, German-American player Walter Bahr) are both solid as team leaders, but neither gives a terribly dynamic performance. The talented supporting actors each get stuck with one annoying character trait and not much else. The climactic match against Team England — led by Bush frontman Gavin Rossdale as real-life great Stanley Mortensen — is genuinely exciting, but even if you can overlook the movie’s glaring historical inaccuracies, The Miracle Match falls well short of greatness.

Ridley Scott’s White Squall, on the other hand, comes much closer. The case could be made that Scott is one of the top 10 living directors, but I don’t know too many people who would list this 1996 seafaring adventure among his finest cinematic accomplishments. However, if you’ve never seen White Squall, it’s definitely worth a look.

The film stars Oscar winner Jeff Bridges as Christopher Sheldon, the captain of the Albatross. The skipper leads a group of teenage private school students on a trip halfway around the world that is meant to teach them discipline and responsibility. The story is based on a real-life, ill-fated voyage that encountered disaster on the high seas. Bridges is terrific as the authoritative captain. His Sheldon is every bit as tough as the job requires, but the actor’s inescapably laid-back demeanor also conveys the cool under pressure needed from a captain.

The performances from the young (at the time) cast are also strong across the board. Scott Wolf is effective as Chuck, the glue guy in the crew who tries to hold everything together. Eric Michael Cole and Ryan Phillippe are both impressive as, respectively, prickly Dean and scaredy cat Gil. Meanwhile, Jeremy Sisto conveys a lifetime of daddy issues in a handful of scenes as spoiled rich kid Frank. In fact, White Squall sort of plays out as Dead Poets Society on a boat — with sailing replacing poetry as the main source of inspiration — until the controversial, titular disaster strikes in a spectacularly thrilling sequence. Though the movie ends as a soggy, rushed courtroom drama, most of White Squall features stunning scenery and an engaging coming-of-age story.

I suppose long-distance running hasn’t really gotten the cinematic shaft. I mean, the sport boasts a Best Picture winner (Chariots of Fire) and, not one, but two biopics of Steve Prefontaine, the iconic 1970s  runner who died at the age of 24 in a car accident. Prefontaine is the 1997 film starring Jared Leto in the title role (and is not to be confused with Without Limits, starring Billy Crudup and released the following year).

The film introduces us to “Pre” when he was a scrappy little boy in Coos Bay, Oregon who was too small to excel at football or baseball. The resulting frustration and the fact that he didn’t look like a prototypical athlete fueled his running career, which is chronicled here from his high school days, to his record-breaking college career at the University of Oregon and his trip to the 1972 Munich Olympics. Leto primarily makes his living these days as the frontman for “30 Seconds to Mars” and his rock-star swagger serves him extremely well when playing the cocky, larger-than-life Prefontaine. Leto is easily the best thing about this movie; though R. Lee Ermey has a handful of nice moments as Pre’s colorful college coach, Bill Bowerman, a much kinder authority figure than his famous Full Metal Jacket character. (I was still disappointed Ermey didn’t call anyone a “jackwaggon.”)

Prefontaine is the only feature film directed by famed documentarian Steve James (Hoop Dreams). So it’s not surprising to see the film take a docudrama approach to telling Pre’s story. One unfortunate result is present-day talking head interviews that, at best, don’t add much to the story or, at worst, feature actors like Breckin Meyer in silly old-age makeup as Pre’s former college roommate. More importantly, James simply doesn’t appear to be very strong at directing actors, resulting in a number of weak moments (anything with Pre and his two love interests) or scenes that are awkwardly blocked. (At least the running sequences are strong.) James’ documentarian eye also leads him to devote more time to historical context than other feature filmmakers. This is a good thing when it comes to depicting something like the tragic 1972 Munich Olympic Games, but is kind of a drag when the last third of the movie focuses on Pre’s fight against the Amateur Track Union and their poor treatment of track and field athletes. The latter is certainly a subject worth exploring, but the movie isn’t nearly as interesting when Pre is away from the track.

I don’t think any of these can be considered great films (though White Squall comes pretty close), but I still say each of them is worth a look. Unfortunately (as convenient as it is having them all in one place), I cannot recommend that you give them a look by picking up this release. Instead, you should petition for or hold out until each of them gets a proper Blu-ray release (only White Squall is currently available on an underwhelming, bare-bones Blu-ray) complete with special features that put each of these remarkable true-life stories in their proper historical context. I may not have loved them all, but I still don’t think this disappointing triple feature should be your first impression of these films.