Home on the Range (Blu-ray)

Posted in: Disc Reviews by David Annandale on July 16th, 2012 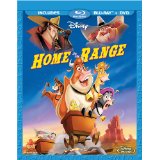 The “Patch of Heaven” farm is about to be seized by the bank, unless $750.00 can be raised, and raised quickly. By lucky coincidence, that is precisely the reward being offered for the capture of cattle rustler Alameda Slim. Three plucky cows (voiced by Roseanne Barr, Judi Dench and Jennifer Tilly) decide to capture Slim and win the reward, thus saving their home.

The opening moments, with a series of Tex Avery-style catastrophes befalling an unfortunate rabbit, are very promising. Here and there are other patches of inspiration, such as when Slim reveals that his foolproof secret for stealing cattle is to hypnotize them by yodeling (leading into one of the stronger musical numbers). Unfortunately, in between are long stretches of flat storytelling and dull jokes. Roseanne Barr is as annoying a presence as a voice artist as she is an actor, and Cuba Gooding Jr.’s horse character is a pale imitation of Eddie Murphy’s work on Mulan and Shrek. There aren’t enough bones tossed to adults, and the two kids I was screening this with were bored out of the room in five minutes flat.

Home On The Range is presented in its original aspect ratio of 1.78:1. The 1080p image is arrived at with an AVC MPEG-4 codec at an average 40 mbps. It’s an impressive bit rate for an impressive high definition image presentation. The video is beyond reproach, at least as far as the colors and sharpness are concerned. The colors are gorgeous, bright and solid, with dead-on contrasts, and there is no grain whatsoever. What is a bit suspect is the ratio. During a fantasy sequence that imitates the Spaghetti Westerns, the aspect shifts to 2.35:1 in one of the film’s better jokes.

The DTS-HD Master Audio 5.1 does full justice to the score (and there are some pretty good, funny songs here ,other problems notwithstanding). The surround elements are almost entirely dominated by the music, which itself is almost constant. There some sound effects, but they are generally pretty low key, always taking back seat to the score. The sound is perfectly clear and undistorted.

As one has come to expect with Disney releases, the extras are a real mix, addressing both very young and older viewers. For the adults there’s a commentary by producer Alice Dewey and co-directors John Sanford and Will Finn. This, along with “Trailblazers: The Making of Homeon the Range” and “Art Review” (narrated by art director David Cutler and background painting director Christy Maltese), provides plenty of behind-the-scenes information. Similarly, there are four deleted scenes (with introduction). For the younger viewers, there’s the “Anytime You Need a Friend” music video and two types of games and activities. The Joke Corral has the maincharacters appearing from behind doors, Hee-Haw style, to tell jokes. “Yodel Mania” offers a yodel memory game, a cartoon documentary about yodeling, and a yodel-maker game. For all ages, there’s a new cartoon  short: “A Dairy Tale: The Three Little Pigs.”

It’s a shame the last of the traditional, non-computer enhanced animated features from Disney should be so lackluster. Nice Blu-ray, though.

Hatfields & Mccoys: Bad Blood Best of He-Man and the Masters of the Universe