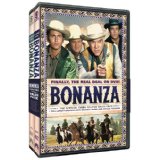 The show would see a lot of characters come and go over the years, but the third season saw the original cast pretty much intact. There were some classic episodes and moments to be found. The season starts out with Hoss killing a bully who was harassing a widow. It’s a blurry line between right and wrong in The Smiler. That line gets worse when the widow changes her story and Hoss might end up strung up. Ben puts together an elaborate con to help a widow who was swindled by a con artist in The Burma Rarity. This has become one of my favorite episodes of the series. Joe is framed as a swindler in a rather light episode called The Many Faces Of Gideon Finch. A woman that Ben rejected attempts to bring ruin to the finances of Ponderosa in The Countess. In The Tin Badge Joe attempts to prove himself by signing on as a small-town sheriff. But they’re setting him up, and now he’s in over his head. In The Land Grab, an old Army friend of Ben’s is ripping off people by selling them fake deeds to part of the Ponderosa. The family is accused of robbing a bank while they are on a cattle drive in The Gamble.

The two sets are sold separately, but you can find deals on the full season. Together you get 34 episodes on 9 discs. Join the Cartwright family for yet another trip into the golden age of television Westerns. “Mr. Cartwright, you sure raise some fine ones!”

Gino Sassani is a member of the Southeastern Film Critic's Association (SEFCA). He is a film and television critic based in Tampa, Florida. He's also the Senior Editor here at Upcomingdiscs. Gino started reviewing films in the early 1990's as a segment of his local television show Focus. He's an award-winning recording artist for Omega Records. Gino is currently working on his 8th album Merchants & Mercenaries. Gino took over Upcomingdiscs Dec 1, 2008. He works out of a home theater he calls The Reel World. Favorite films: The Godfather, The Godfather Part II, The Body Snatcher (Val Lewton film with Karloff and Lugosi, not the pod people film), Unforgiven, Gladiator, The Lion King, Jaws, Son Of Frankenstein, The Good, The Bad And The Ugly, and Monsters, Inc.
Friends with Kids (Blu-ray) Treasure Planet (10th Anniversary Edition) (Blu-ray)