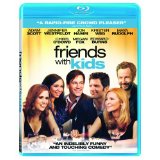 “I will be 100 percent committed to this half the time.”

This offbeat, knowingly unromantic declaration between long-time friends Jason and Julie kicks the plot of Friends with Kids into motion. The platonic pair decide to have a child together after watching the soul-sucking effect parenthood has had on their married friends. The plan is for Jason and Julie to share parental responsibilities right down the middle while living separate romantic lives. Don’t worry. I was thinking the exact same thing as you and all the other characters in the movie when they hear about this harebrained scheme: “Good luck with that!”

Due to its pedigree, I actually had high hopes that this story would veer from the typical romantic comedy/drama path. Friends with Kids is the latest independent comedy written by star Jennifer Westfeldt, also making her directorial debut. In her previous two scripts, Westfeldt has tweaked the idea of conventional relationships by starring as a single gal who gives lesbianism a try after multiple failures with men (Kissing Jessica Stein) and as a woman who proposes to a man the same day she meets him (Ira & Abby). In other words, Jason and Julie’s unusual arrangement is right up Westfeldt’s alley.

It’s too bad that, instead of originality, Westfeldt seems more interested in liberally borrowing from When Harry Met Sally — not just the, “Can men and women be friends?” question, but there’s even a New Year’s scene where Jason lists all the specific things he loves about Julie — which, itself, is the greatest Woody Allen movie Woody Allen had nothing to do with. (Westfeldt even assumes some of Allen’s neurotic mannerisms.) Adam Scott (Parks and Recreation, Party Down) and Westfeldt star as Jason and Julie, and are at their peak when they’re bantering casually and profanely as friends. Unfortunately, the real-life pals have zero romantic heat when the pair starts to realize their true feelings for each other. (That lack of chemistry, on the other hand, is successfully played for laughs during their first attempt at conception.) I like that the duo (mostly Jason) are somewhat portrayed as a-holes because it’s what gives them the arrogance to think their kid plan will succeed.

Except for a terrific, emotionally-charged dinner scene with the entire cast, this is less of an ensemble piece than I expected. The standout was a hilarious Chris O’Dowd (Bridesmaids) as Alex, a weary husband and father who has miraculously maintained his good nature. The same can’t be said for his wife Leslie (Maya Rudolph, Bridesmaids), who makes a great foil for him. Jon Hamm (Bridesmaids) and Kristen Wiig (Bridesmaids) play Ben and Missy, an initially frisky couple who descend into unhappiness when life gets more challenging. Hamm and Wiig don’t have a ton to do until that dinner scene, but they nicely handle a lot of the dramatic heavy lifting. Meanwhile, Edward Burns (not-Bridesmaids) and Megan Fox (not-Transformers anymore) turn up as love interests for Julie and Jason, respectively. I actually thought being a utility player in an ensemble comedy was a good look for Fox.

The cast definitely came to play, and Friends with Kids packs in a good amount of sharp dialogue and a surprising dramatic punch. The movie wants to reminds us there’s romance to be found in the often arduous journey of everyday life. It’s just a little hard to believe that message when the film relies so heavily on lazy stereotypes about how miserable being married with children can be.

Friends with Kids is presented in its original aspect ratio of 1.78:1. The 1080p image is arrived at with an AVC MPEG-4 codec at an average of 36 mbps. New York City in the autumn practically sparkles thanks to a pristine, unambitious transfer. (Central Park, in particular, looks beautifully textured.) The sharpness, color and contrast are all spot on. Not much use for black levels, but they’re also pretty good. There’s not a lot of heavy lifting here — mostly mid-range shots and indoor scenes — but the Blu-ray presents what it is supposed to present very cleanly.

The DTS-HD Master Audio 5.1 track delivers the dialogue adequately — sometimes I had to turn up the volume a bit more than usual to catch what was being said — but is even more impressive during scenes with the entire group. Overlapping chatter is nicely divided and easily intelligible, which is particularly important when you’ve got a bunch of improv pros tossing out one-liners. The few outdoor and trendy restaurant scenes weren’t as immersive as I hoped, but most of the time is spent in the characters’ apartments, so it’s not that big of a deal.

Audio commentary with Jennifer Westfeldt, Jon Hamm and William Rexer: Director/writer/producer/star Westfeldt, actor/producer Hamm, and director of photography Rexer hold court during this friendly, complimentary chat. The biggest takeaway is that, despite half the cast of a mega-hit like Bridesmaids being present, this movie was a modestly-budgeted (less than $10 million) indie comedy. Westfeldt talks repeatedly about “stealing shots” all over New York (some of the skyline shots did look like stock footage) and how she and Scott stuck ice cubes in their mouths before scenes so that their breath wouldn’t be visible (instead of removing it digitally). They also talk about the challenges of making single-digit temperatures during filming look like autumn, and Hamm recommends you stop by all the movie’s locations. (“Next time you’re in New York…”)

Making Friends with Kids: (8:10) Long time real-life pair Westfeldt and Hamm reveal that they were inspired to make this movie after watching their friends (including Scott) have kids and feeling out of synch with their peer group. Burns talks about the strength of the screenplay attracting all the actors, but it really does seem like this group of friends just wanted to hang out and make a movie no matter what. (Wiig and Rudolph are particularly funny during their joint interviews.)

Fun with Actors and Kids (Ad-libs and Bloopers): (11:55) With such an improv-friendly cast, a special feature highlighting their skills was inevitable. Surprisingly, I enjoyed the kids portion a bit more because it shows how challenging it is to direct young children and because of the one little boy who got frustrated that Scott kept saying the same thing over and over again when they did a scene multiple times. Features a Play All option.

MJ Rocks at Video Games with Optional Commentary: (3:49) Meagan Fox isn’t an uproarious comedic actress, but she’s pleasantly natural here as we watch her and Scott improv their way through a scene where her character destroys Jason in Gears of War. The commentary reveals Fox is a huge fan of the game in real life and that Scott had apparently never held an Xbox controller before this scene.

Scene 42: Anatomy of a Gag with Optional Commentary: (5:06) The handy script-to-scene comparison shows how the actors insert certain little ad libs. Also includes unused riffs for the scene where Jason and Julie tell Alex and Leslie about their plan. Funny stuff.

Deleted Scenes with Optional Commentary: (8:17) This group of eight deleted scenes is mostly an extension of existing moments from the movie. The best of the bunch involve a brief, funny scene with Samantha Bee (The Daily Show) that was left on the cutting room floor and a scene showing more of Wiig’s character quietly becoming unhinged. Features a Play All option.

Friends with Kids wants to be smarter and more grown-up than the average relationship comedy. Though the movie boasts a strong cast, a promising start and some standout moments, that’s all they wind up being: moments. In the end, Friends with Kids turns out to be just like every other rom-com with almost nothing new to say. (Except for a daring, polarizing final line that probably won’t be quoted at slumber parties along with dialogue from The Notebook or Notting Hill.)