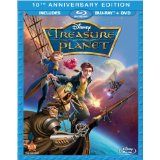 “On the clearest of nights when the winds of the Etherium were calm and peaceful, the great merchant ships with their cargos of Arturian Solar Crystals felt safe and secure. Little did they suspect that they were being pursued by pirates.”

Everybody loves a pirate story, and Walt Disney Studios has made a good bit of money from that particular fact. The Pirates of the Caribbean ride and eventual Johnny Depp films have gone a long way to fill the booty chests of the studio to overflow. But, of course, Disney didn’t invent the pirate sensation, and they were not the first to fully capitalize on their popularity. That honor might well fall to Robert Louis Stevenson and his 1883 novel Treasure Island. The book has been a favorite of daydreaming young boys and girls for well near 150 years. More than just a story of pirates and adventure, it’s a story of self-discovery and coming of age. It’s quite a timeless tale and has had several film versions over the years. In 2002 Walt Disney Animation took on the task and created an animated feature that used the material rather loosely and opted for a grand space adventure. The result was Treasure Planet.

“… and the most feared of all these pirates was the notorious Captain Nathanial Flint. Flint and his band of renegades swooped in out of nowhere and then, gathering up their spoils, vanished without a trace. Flint’s secret trove was never found. But stories persist that it remains hidden somewhere at the farthest reaches of the galaxy. The loot of a thousand worlds – Treasure Planet.”

Jim Hawkins (Gordon-Levitt) loved to read pirate adventures as a boy. His father had disappeared aboard a ship many years before, and he was raised by his mother who owned a local inn. As an adolescent, Jim found himself in constant trouble. He was in search of a direction, and it finally comes when pirate Billy Bones (McGoohan) crashes practically at his feet. With his dying breath he entrusts Jim with a mysterious orb and a warning: “Beware the cyborg”. The orb reveals itself to be a map to the legendary treasure of Captain Flint and his Treasure Planet. It’s the adventure Jim has been waiting for his entire life. With the help of regular inn patron Professor Doppler (Hyde Pierce) they hire a ship to find the treasure.

The ship is led by Captain Amelia (Thompson) and her faithful first mate Mr. Arrow (Browne). But the crew was hired by Doppler, and their loyalties are in question. Jim is put under the care of the cook John Silver (Murray) who finds himself attached to the lad. Silver happens to also be a cyborg. Is he the one Billy Bones warned against? It’s hard to believe as Silver becomes almost the father Jim never knew. But loyalties will be put to the test when the prize is the loot of a thousand worlds.

The story follows the general plot from Treasure Island and utilizes many of the important characters like John Silver and Jim Hawkins. But this story takes place as part of a stylized space opera. The ships look very much like classic galleons and pirate ships of Stevenson’s tale, but they travel in space instead of on the high seas. The sails are solar sails, but all of the traditional elements remain. You can still hear the creaking of the ships, and the pirates look and talk like the ones we’ve grown up seeing.

The voice cast is an excellent one. Frasier’s David Hyde Pierce play’s Doppler, Jim’s confidant and partner in the expedition. At first his voice comes off rather awkward, but he grows into the part once we understand that he is the odd character out in the adventure and not really intended to blend in. Joseph Gordon-Levitt is fine as Jim Hawkins. The real star of the show is the character of John Silver, and Brian Murray brings the character to life quite nicely. Emma Thompson is a surprise standout as Captain Amelia, and veteran star Patrick McGoohan has a brief but crucial role as Billy Bones. Disney includes the usual tradition of a cute sidekick character. Here there are two. For most of the film there is the small blob-like shape shifter Morph. He begins as Silver’s parrot substitute and eventually befriends Jim. He’s silly and brings much of the comic relief. Later Martin Short takes over the comedy duties as the robot B.E.N. who has been guarding the treasure.

By 2002 Disney had nearly abandoned its classic animation department and focused more on the computer-generated features that would become the bailiwick of their Pixar branch. Treasure Planet was considered a kind of transition film that utilized a classic animation style and framework but had many elements of computer animation fused with the final product. While the blend looked quite good, most of the time the styles often clashed, and it was obvious at times. The character of John Silver was a combination of classic and computer animation. He was mostly drawn, but he had cyborg parts, particularly a multi-purpose arm that was CG. They never really looked organic and part of the same character. So, while there are beautiful images here, the final look remains somewhat awkward. The result was a very disappointing $38 million flop on a $140 million budget.

Treasure Planet is presented in its original aspect ratio of 1.66:1. The 1080p image is arrived at with an AVC MPEG-4 codec at an average 25 mbps. The film is certainly colorful. The bright colors really pop in this high-definition image presentation. You really get a chance to fully appreciate some of the incredible visuals offered here. There is a decidedly CG moment when the ship is surrounded by space whales. The creatures are quite impressive in detail and clarity. It’s a milestone moment for the image quality. Still, the awkward mix of animation styles is even more evident in high definition. Black levels are near perfect.

The DTS-HD Master Audio 5.1 is also quite impressive. I mentioned earlier the creaking of the ships, and that’s a wonderful example of the use of surrounds to create an immersive environment. Dialog is crystal clear, as are the couple of musical numbers in the film. The James Newton Howard score is actually magnificent and a highlight of the film. Its Celtic and often haunting tones could have been a part of a much larger film and help to make the movie appear so much larger than life.

The extras are all in Standard Definition and are ported over from the DVD release.

Most include an introduction by Laurie Metcalf, who voiced Jim’s mother in the film.

First up are three deleted scenes (all with introductions), all of which are very rough sketches of scrapped concepts. Next we have the Behind-the-Scenes section that contains a slew of short featurettes covering topics such as Character Analysis, Still Galleries, Music, and most importantly Animation. This Animation section is very interesting, and goes into the melding of 2D and 3D animation… very educational.

This is one of those cases where the presentation of a film is flawless. The voice cast is great and the material is pretty rock-solid. But it never quite comes together in just the right way. The Disney magic is evident but not quite effective. It will never become of the studio’s many classics, but it is worth a quick rental, to be sure. Give Disney credit for at least reaching. “You give up a few things, chasing a dream.”

Gino Sassani is a member of the Southeastern Film Critic's Association (SEFCA). He is a film and television critic based in Tampa, Florida. He's also the Senior Editor here at Upcomingdiscs. Gino started reviewing films in the early 1990's as a segment of his local television show Focus. He's an award-winning recording artist for Omega Records. Gino is currently working on his 8th album Merchants & Mercenaries. Gino took over Upcomingdiscs Dec 1, 2008. He works out of a home theater he calls The Reel World. Favorite films: The Godfather, The Godfather Part II, The Body Snatcher (Val Lewton film with Karloff and Lugosi, not the pod people film), Unforgiven, Gladiator, The Lion King, Jaws, Son Of Frankenstein, The Good, The Bad And The Ugly, and Monsters, Inc.
Bonanza: The Complete Official Third Season The Dark Knight Rises