Girl From the Naked Eye 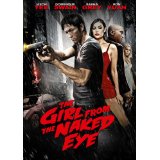 There is a thin line between paying homage and ripping off another film.  In the case of The Girl From The Naked Eye you may as well call it outright theft.  If you’ve ever seen Sin City and you’re a fan, be ready to have your eyes roll and at times be offended at how blatantly these film makers rip off Frank Miller’s masterpiece The Hard Goodbye.  Sure, there is nothing wrong with a little inspiration from a piece of work, but come on, you’re going to tell me it took three writers to get together and rip off Miller and come up with this?  I could even appreciate them trying to do a film noir piece, but after watching this I have to question if any of the filmmakers ever watched  a piece of film noir.

From the start this film is a mess.  The narration by our antihero Jake (Jason Yee) just doesn’t hold up; they would have been better off with him saying as little as possible.  He simply doesn’t have the voice for narration or for the kind of film they were attempting to make. To be fair, Mr. Yee was the only thing positive throughout this film.  When he’s not talking and he’s simply stalking the halls or kicking ass, Yee is fun to watch, and I think he could make a nice career for himself.

Considering this is a simple story about Jake, an escort driver who is trying to figure out who killed his girlfriend/escort Sandy (Samantha Streets) you’d hope they’d spend time on quality character development.  The story is so simple they could have taken this any direction they wanted, and it’s a shame they simply didn’t even attempt to deliver something new to the genre.  Even when they introduce Alissa (Dominique Swain) as another escort, they don’t offer us any mystery to her or any sexual tension.  Nope, she’s just there at the bar to dispense advice to Jake, and apparently if you’ve read a few Nancy Drew books while growing up, you’re able to solve murders.  Alissa should have been along for the ride trying to help solve the mystery or had something to do with the mystery, not just a convenient way to point Jake in the right direction.  He shouldn’t be able to trust anyone; every step closer to the truth behind Sandy being killed should be another step closer to his possible death or arrest.  But there is no suspense to this at all.  Where the stakes should be raised there are no stakes at all in this film.

Even in the movie world you need to be somewhat realistic.  The fact that Jake is going around kicking in doors and beating the crap out of his boss without any real consequence is a bother to me.  Sure, they have a small hit squad out for Jake, but they are so inept you wonder why Jake ever was afraid to leave the life of crime to begin with.  Simon (Ron Yuan), Jake’s boss, is without a doubt the worst pimp ever written for the screen; these girls are supposed to be his property, but he couldn’t care less what happens to them or that they don’t listen to him.  And when the idea is presented to kill Jake instead of being ready for some payback, Simon simply would rather have him taken to jail…Say what?  So I take it he’s the pimp with the heart of gold?

The moment I groaned the most though, the point where I’m pretty sure I cursed the screen out of shock and disbelief, came when the film tried to recreate the awesomeness of the epic hallway fight scene from Old Boy.  If you do not know the scene I’m talking about, go see that movie right now and prepare to have your mind blown by the sheer awesomeness of that film.  Here they try to do the same shot setup and have the character do battle down a long hallway.  The sad part is this in no way on the same level of intensity, or insanity for that matter.  In Old Boy we see our hero take on a small army, here we see him fight a handful of guys.  Sure the scene has been remade before; Repo Men did a good job paying homage, but they understood what they were doing and invested the time to bring something new to it.

And that brings me to the direction of this film.  Where is the fog, the constant rain, the moody atmosphere?  There is no moodiness to this film, not one ounce of atmosphere developed.  No clever use of shadows, no slick camera shots worth mentioning.  Check out The Third Man, Body Heat, The Asphalt Jungle, Blood Simple , and the list goes on for films that execute the noir style.  This is a big deal because atmosphere is what the noir films are best known for, not big flashy effects, but conveying a mood and style to make up for what they lacked in budget.

Had this been a simple action film, a lot of this could be forgiven.  But the filmmakers set out to try to do something more and failed at every point.  If you see this title and see the DVD cover and you’re expecting Sin City, you will be so disappointed.  What I’d recommend is maybe check out one of the titles I mentioned above and enjoy.

Brent Lorentson is a horror writer and film critic based out of Tampa, Florida. With a BA in Digital Film, he co-wrote and co-directed Scavenger Hunt. His short stories have appeared in various horror anthologies. In 2019 his short script Fertile Blood will be a part of the anthology horror film Slumber Party. He is currently working on his first novel A Dark and Secret Place set to be released in late 2019. Favorite Films: Taxi Driver, Fight Club, I Saw the Devil, The Wild Bunch, Dawn of the Dead, A Clockwork Orange, Pulp Fiction, Heathers, The Monster Squad, and High Fidelity.
My Way (Blu-ray) Contest: Win Cherry Bomb on Blu-ray From Well Go USA