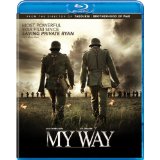 “An Asian man wearing a German uniform was discovered by the U.S. military at Normandy on D-Day. Upon questioning, he was identified as a Korean.”

My Way cannily opens with this bit of real-life information. As the movie reaches its heartbreaking conclusion, we know only one of a pair of lifelong rivals-turned-friends — one Korean, one Japanese — will make it to the end.

The film follows the parallel lives of Jun-shik (Jang Dong-gun) and Tatsuo (Joe Odagiri). Jun-shik and his humble family work on the farm of Tatsuo’s grandfather, a member of the Imperial Japanese Army in Japanese-occupied Korea. The two youngsters — who are both interested in long-distance running — meet as boys in the late 1920s and quickly become rivals as their respective country’s best marathoners. After a controversial result at an Olympic trial sparks a riot, Jun-shik and a group of fellow Koreans are forced into service for the Imperial Japanese Army. More than a year later, Jun-shik meets up with Tatsuo, who is now a colonel and assumes command of the unit. From there, the two men’s lives become inextricably and violently intertwined as the ensuing years bring the escalation of World War II, and each soldier does what is necessary to survive. That includes wearing the uniforms of Japanese, Soviet and German forces.

Though it largely focuses on these two soldiers, the story is told on an impressively epic scale. That makes sense because My Way is billed as the most expensive South Korean film ever made. (It boasts a modest-by-American-film-standards $23 million budget.) Director Kang Je-kyu first broke Korean box office records with 1999’s Swiri, a Hollywood-style action flick credited with popularizing domestic films in the country. The filmmaker shattered box office records again with his next film, 2004’s Tae Guk Gi: The Brotherhood of War. Seven years later, Kang returned to the battlefield.

My Way boasts some thrilling sequences before combat even begins, including a high-adrenaline rickshaw sprint across a crowded town and the down-to-the-wire Olympic trial. Despite the graphic violence on the battlefield, Kang doesn’t appear to be totally going for gritty realism. (Especially not when Jun-shik and Tatsuo miraculously survive an explosion unscathed that probably should’ve killed them both, one of several convenient close calls for the duo.) The stylistic flourishes are too showy, inspiring an equal amount of “Whoa, that was cool!” (especially in a sequence against a Chinese sniper) as “Ugh, that was horrific!” reactions. Still, the director comes up with some truly indelible images, especially a kamikaze sequence with exploding trucks crashing into tanks and a crazed Tatsuo demanding that his men run toward certain death.

Where the film comes up short is in characterization. Although he’s the protagonist, all we know about Jun-shik is that he’s strong willed and a great marathoner. Tatsuo gets more of an arc, as Odagiri starts off playing arrogance and anger before going to delusional madness, weariness and hopefulness. Both actors are quite good, but the characters’ eventual bond still came off as a bit rushed and unconvincing. Beyond the two leads, there isn’t a whole lot to latch onto. Kim In-kwon comes the closest as a buffoonish friend of Jun-shik who becomes more interesting when the tables are turned and he gains some power. Meanwhile, Chinese star Fan Bingbing winds up being little more than a lovely, distracting presence as a romantic interest for Jun-shik. Unfortunately, their connection is half-baked at best.

The scenes between the battles feature some fine details — especially a Soviet POW camp where frostbite is just as deadly as bullet — but eventually start to plod along and become repetitive. The movie’s 143-minute running time probably could’ve been trimmed by about 15 to 20 minutes. The film’s staging of the D-Day invasion, like the rest of My Way, can’t help but veer into melodrama. Fortunately, it’s still a fantastically exciting sequence that shows the famous conflict from a perspective most American audiences haven’t seen. It also serves as a strong climax for a film that proves Hollywood hasn’t totally cornered the market on big-hearted, big-budget excess.

My Way is presented in its original aspect ratio of 2.35 :1. The 1080p image is arrived at with an AVC MPEG-4 codec at an average of 35 mbps. The film juggles a handful of visual palettes — related to different locations and time periods — and handles each brilliantly. The bright colors from the early part of the film are as vivid as the battlefield sequences are intentionally muted. You can practically see each snow flake coming down in the Soviet POW camp scenes. The image is exceedingly sharp (especially during close-ups) while providing a pleasing amount of texture (in uniforms, in flesh that is caked in mud and/or blood). Even the few instances of video noise — usually taking place during frantic battles — were mostly appealing and fit within the context of the film.

The DTS-HD Master Audio 5.1 track shines beyond the battle sequences. You get an immersive experience from the very beginning when young Tatsuo and his family drive through the busy city and arrive in their new home. The dialogue (not that I can actually understand it) comes through clearly and dynamically, even during the film’s most hectic moments. But back to those battle sequences: there’s a fantastic depth as your speakers seemingly bring every bullet and explosion to life all around you. I was particularly impressed by the bottom end of the track, which chillingly transmitted the low rumble of tanks in the distance. If the track has one tiny fault is that it’s a bit too aggressive, especially when it comes to the overbearing musical score. A little more subtlety there would’ve gone a long way. There is also an English language DTS-HD Master Audio 5.1 track, as well as Korean and English Dolby Digital 2.0 Stereo tracks.

(Note: You can watch the special features below individually or start with the “Making of” and watch them all at once because they auto play one after the other.)

Making of: (9:03) Presented in standard definition, this consists mostly of on-the-set footage of the Olympic tryout race with its ensuing riot and Tatsuo leading his troops into battle, as well as a few other scenes. Minimal time is spent actually watching the cast and crew pal around behind the scenes.

Interviews with actor Jang Dong-gun and director Kang Je-kyu: (5:52) Jang and Kang both state that a documentary about a Korean man at Normandy initially piqued their curiosity. Jang praises his director (it’s their second collaboration) and notes that (for better or worse) his character is the only one that isn’t changed by war. The director admits he was concerned about making another war film after his lengthy hiatus, but states the story was worth the challenge. This is the best feature among the bonus material, but that’s not saying much. Presented in standard definition.

As I mentioned before, this is the most expensive South Korean film ever made and you can certainly see the money up on the screen. Fortunately, the project’s grand scale translates rather nicely to the Blu-ray, which boasts a dynamite audio/visual presentation but disappointing special features. (There should’ve been a mini doc devoted to explaining why this film has such a generic title.)

Though the movie is flawed and bombastic, it’s still worth seeing because it’s an emotional story told with style and buoyed by a pair of solid lead performances. My Way, along with the subtler The Front Line,  shows that Korean filmmakers these days can make a war movie just as well as their Hollywood counterparts.

The Dark Knight Rises Girl From the Naked Eye