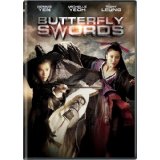 Our pals over at Well Go USA have given us 3copies of Butterfly Swords on DVD.  Donnie Yen, Michelle Yeoh (Crouching Tiger Hidden Dragon, Kung Fu Panda 2) and Tony Leung (Hero, Infernal Affairs) combine amazing martial arts with high flying wire work as members of an elite group of assassins loyal to the king. When a group of Rebels threaten to take down the empire, they must infiltrate the organization in order to stop them. The bonus features includes brand new English subtitles.  To win a copy of this prize, follow these instructions.

Gino Sassani is a member of the Southeastern Film Critic's Association (SEFCA). He is a film and television critic based in Tampa, Florida. He's also the Senior Editor here at Upcomingdiscs. Gino started reviewing films in the early 1990's as a segment of his local television show Focus. He's an award-winning recording artist for Omega Records. Gino is currently working on his 8th album Merchants & Mercenaries. Gino took over Upcomingdiscs Dec 1, 2008. He works out of a home theater he calls The Reel World. Favorite films: The Godfather, The Godfather Part II, The Body Snatcher (Val Lewton film with Karloff and Lugosi, not the pod people film), Unforgiven, Gladiator, The Lion King, Jaws, Son Of Frankenstein, The Good, The Bad And The Ugly, and Monsters, Inc.
Ice Road Truckers: World’s Most Dangerous Roads – The Complete Season Two Star Trek: The Next Generation – Season One (Blu-ray)