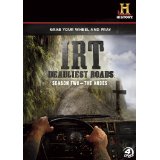 “The North Yungas Road, better known as El Camino De La Muerto, The Death Road, was carved from the mountain in the 1930’s by Paraguayan prisoners during the Chaco War. This road’s still one of the only routes connecting the mountain city of La Paz to the Amazon lowlands…”

“It’s estimated that up to 300 people a year are killed here where the drop-offs stretch to over 2000 feet.”

The season is split into two sections this time. The first seven episodes find the drivers in Bolivia, while the last six find them on the Andes Mountains in Peru. The dangers are pretty much the same. The mountain roads are narrow, often providing just inches of room to the edge of a cliff that will drop them thousands of feet if they misjudge the distance. But as many of the truckers mention, it’s not really that important after the first 100 feet. The end is the same. You’re dead at the bottom. The cargo includes livestock and explosives. The drivers are placed in teams of two. One acts as a spotter on those tight curves. Remember, there is no guardrail here.

Lisa teams with Rick Redmon for a couple of episodes. You might remember Rick was the guy who couldn’t get along with anyone in Alaska. He eventually got fired. It’s not much different here. He doesn’t last more that two episodes and is replaced with G.W. Boles, a show newcomer. Lisa doesn’t really want him to drive, and it provides some tension.

The Polar Bear Hugh is back with his buddy and partner Rick. But Rick also tires of the dangers and leaves the same time that the other Rick does. Hugh never gets a new partner and goes it alone for most of the season. Yes, he’s still beating the crap out of the trucks and laughing about it all.

The final team is a duo of rookies Tim & Tito who call themselves team TNT. They are actually the most successful team, but their arrogance and juvenile pranks make them pretty dull to watch.

The season still has those dramatic CGI demonstrations that show you what can go wrong with explosive results. There’s no “leader board” here. They don’t keep the competitive nature going in this show. In the end it’s much more of the same with a new environment.

In the end, once again I didn’t find this as entertaining as the Ice Road shows. I can’t exactly put my foot on it. The vistas are quite beautiful, but it doesn’t have nearly the same energy. But A&E is still making them, and I’ll keep watching them, “because that’s what I do”.

Gino Sassani is a member of the Southeastern Film Critic's Association (SEFCA). He is a film and television critic based in Tampa, Florida. He's also the Senior Editor here at Upcomingdiscs. Gino started reviewing films in the early 1990's as a segment of his local television show Focus. He's an award-winning recording artist for Omega Records. Gino is currently working on his 8th album Merchants & Mercenaries. Gino took over Upcomingdiscs Dec 1, 2008. He works out of a home theater he calls The Reel World. Favorite films: The Godfather, The Godfather Part II, The Body Snatcher (Val Lewton film with Karloff and Lugosi, not the pod people film), Unforgiven, Gladiator, The Lion King, Jaws, Son Of Frankenstein, The Good, The Bad And The Ugly, and Monsters, Inc.
Transformers Prime: One Shall Stand Contest: Win Butterfly Swords From Well Go USA