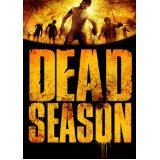 “This island is cursed.”

Like a viral plague spreading across the land, zombie movies, television series, games and books rise around us in great numbers and threaten to eat the very genre they spring from. We have officially moved well past the vampire craze, and now the undead crave flesh instead of blood. Much like the zombies themselves, they come in many varieties, some remain fresh and move quickly, while most are rotten, shamble along slowly, and quite frankly stink. Dead Season falls in the latter category.

Dead Season takes most of its cues from the AMC series, The Walking Dead. Like the show, it begins well after the zombie apocalypse and focuses primarily on the survivors. Also like the series it calls its zombies “Walkers.” In fact, everyone, without interaction between them, refer to the zombies by this name. Was there a mass text informing the survivors to use this nickname? I found it odd that even the living inhabitants on an isolated island refer to the living dead by this term. Methinks the writers try a bit to hard to connect this inferior film to that vastly superior series.

Elvis (Scott Peat), a paramedic who may have treated patient zero in the flesh-eating pandemic, spends his days searching for other survivors on a ham radio where he contacts Tweeter (Marissa Merrill), a much younger woman whose single expression throughout the movie is a petulant pout. Tweeter finds him and for some reason decides to rob Elvis of his canned goods instead of meeting him and embracing this concept of safety in numbers. Evidently this zombie epidemic is radiation-borne and a side effect involves contaminating any existing animal or vegetable life, therefore leaving the potential food source rotten to the core.

Elvis catches up with her offering food and shelter for the short-sided thief. Elvis invites Tweeter (did the writers go out of their way to come up with stupid names?) to escape with him to an island rumored to be walker-free. After securing a boat from Elvis’ former coworker, Lesh (Sam Raimi favorite Dan Hicks) the two set off for Desoto, a fictional island off the coast of Miami. Of course, once they get there this rumor is immediately disproven.

The island serves as home base to a paramilitary survivalist group led by a stern, but seemingly fair leader, Kurt Conrad (James C. Burns) whose name is a clumsy tribute to Joseph Conrad’s Heart of Darkness, combining the name of novella’s villain, Kurtz, with the author’s last name; but I digress. The militaristic group explains that the island only recently became overrun with zombies due to the shipwrecking of a passing Danish cruise liner. Conrad and his compatriots interrogate Elvis and Tweeter, deciding to let them live due to Elvis’ medical training.

The story plods along introducing many rude soldiers and Conrad’s estranged and imprisoned daughter, Rachel (Corisca Wilson) who Tweeter, the only other female on the island, takes under her wing. An interesting wrinkle in the narrative when it is revealed that, on top experimenting on the walkers ala Romero’s Day of the Dead, the survivalists indulge in rampant cannibalism due to the shortage of uncontaminated food. This is how they deal with survivors who arrive on the island seeking escape and shelter. Instead of immediately trying to escape this crazy island, Elvis helps in harvesting the “healthy” dead and preparing the meat for consumption like some kind of sick butcher. Tweeter finally convinces him to flee the compound and take Rachel with them. And the race to escape begins.

There is decent gore and some interesting themes here, but for the most part the zombie makeup is uninspired and the acting is amateurish with the exception of Peat. Burns, a recognizable character actor, phones in his performance, due undoubtedly to being saddled with banal dialog and absolutely no character arc. Merrill, a one-note actor throughout the movie, seems to only be able to evoke one emotion, anger, but she does reveal her breasts a couple times and shares a love scene with Peat, a rarity in this genre. Otherwise, there is nothing new added to the zombie genre. You will be able to guess each “twist” and see the ending coming a long way away.

Dead Season is just interesting enough to make it to the end if you love zombie movies, but certainly not something I would recommend rushing out to add to your collection. It rises slightly above SyFy Channel original movies, but ultimately ends up dead on arrival.