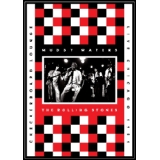 While touring the states in 1981, The Rolling Stones found themselves with a rare night off in Chicago and decided to take advantage of it by attending a Muddy Waters concert. They owed Waters for their initiation into blues, and they even took their name from the title of one of his songs.

After owning the stage with his electrifying performance, Muddy Waters began to call forth his disciples in the audience, including Mick Jagger, Keith Richards, Ron Wood, and Ian Stewart of the Stones. It should be noted that Rolling Stones’ drummer Charlie Watts and bassist Bill Wyman are noticeably absent from the Checkerboard set, making the disc’s title a bit of a misnomer (however Watts appears on the “bonus” track, Black Limousine).

Blues greats, Buddy Guy, Junior Wells and Lefty Dizz also join Waters’ show. The jam sessions will thrill any blues enthusiast. Lefty is the only letdown in this stellar set; he is clearly drunk and a bit obnoxious. It is fascinating to watch Mick, clearly intimidated his idol, start out blending into the background only to slowly return to the Mick we know and even working in some of his signature moves. Keith fits in perfectly, cigarette dangling from his lips and bottle by his side, as he matches the guitar greats lick for lick.

Thankfully a camera crew was in attendance and captured this amazing show on video. For years this legendary concert only existed on bootleg tapes. The clean DVD transfer and remastered Dolby 5.1 audio electrify the performance. Unfortunately they shot the concert on standard-definition videotape, full-framed in an aspect ratio of 1.33:1. The image quality is decent, but obviously limited by the video technology of available in 1981. The DVD/CD is accompanied by a booklet containing an essay by Robert Gordon, author of Can’t Be Satisfied: The Life and Times of Muddy Waters. Although not truly a Stones concert, as they all don’t play during the show, this is a must have set for both Rolling Stones fans as well as fans of blues in general.