On the Inside (Blu-Ray) 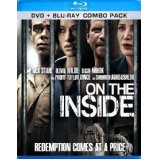 Most people who read my reviews can realize that me and prison films just do not mix. Far too many of them are incredibly hokey and if I hear one more cliché about dropping the soap, I swear I might just go watch about a 12 hour Golden Girls marathon. However, our film today deals with a psychiatric hospital for criminals. It sounds a lot like a prison to me, but perhaps today’s review will take on a much gentler tone and provide us with something just a little different.

Allen Meneric (played by Nick Stahl) and his girlfriend (played by Haley Webb) drive up to a house. Allen is angry, upset and tells his girlfriend to get in the car and drive home. Apparently, the girlfriend was raped by a guy who just so happens to be here at the house ready for Allen to strike. The girl drives away sobbing. Meanwhile, Allen proceeds to pick up a wrench. That is when everything goes black.

When we come back, we see Allen at the police station with a detective yelling at him. The detective keeps repeating, you killed the wrong man. Allen actually killed a co-worker of the rapist, an innocent man. His misguided effort does not land him in jail; it actually lands him in a State secure treatment facility called Northwood. He will be there for the immediate future and as with all first time visitors of the facility; he will be placed in maximum security.

We enter the facility and we see that guard, Tom Bogotus (played by Tariq Trotter) is back after a long vacation. He is greeted and checked by one of the other guards, Nathan Parks (played by Daniel London) as part of procedure. Meanwhile, we meet Mia Conlon (played by Olivia Wilde) in the female section of the facility. She seems normal, but her bipolar personality led to innocent deaths.

Allen is trying to adapt to Northwood and he meets a character named Ben Marshall (played by Pruitt Taylor Vince). Ben has been there for a while and he might seem pleasant, in reality his behavior can lead to random and unpredictable acts of violence especially when he drifts in and out of reality. Back at the female section, we listen to Mia explain to her case worker, Mrs. Standings (played by Joanne Baron) that she is having trouble dealing with being here at Northwood.

Back to the male maximum security ward, we watch as Allen is making double sure not to make any new friends at the facility. He even tells his girlfriend not to visit. However, Tom takes an interest in Allen and tells him if he plays the game, he should be able to be transferred to the minimum security section where he will also be able to interact with females in a limited fashion. But part of that game involves having session with one of the psychiatrists on staff, Dr. Lofton (played by Shohreh Aghdashloo).

Today is Arts and Crafts day. The maximum security team of Allen, Ben and fellow patient, Carl Tarses (played by Dash Mihok) will be placed in a workroom together. Carl is a very violent and insane individual. A fight soon breaks out in the Arts and Crafts room between all three to varying degrees. However, it is soon determined that Allen did not instigate the altercation and soon afterwards is transferred to minimum security. However, the story does not end there, it is just beginning.

As it turns out, this movie becomes something of a love story about half way in before it gets to the climax. But half an hour in unless one is just a good guesser (or watched way too many movies), one does not get that notion at all. Anyway, the first thing that does stand out with this movie is that there are quite a bit of good performance. The standout performance has to be Pruitt Taylor Vince who plays perhaps one of the best mental patients I have ever seen in a movie.

He really does a good job and for that matter, so does Dash Mihok as yet another convincing mental patient. Dash is every bit the evil persona he portrays. I could take or leave Nick Stahl’s performance, there are moments where he does rise above and then others I was wanting more. I think the major problem for me was the female lead and main female supporting actress, Olivia Wilde and Shohreh Aghdashloo respectively.

This is the last movie Olivia really did before she started blowing up the movie place with strong female roles in Cowboys and Aliens, The Change-Up and Tron: Legacy among others. Here, we get almost zero sense that she is in the slightest way, bipolar. She is cookie cutter, and has literally no depth. The worst affliction she has that she does not like laundry and she likes her gin in baby bottles.

Shohreh is arguably worse and seems to be written in a way where she shows as little emotion as possible. I think her role would have been better served as a complete coward or one with strange desires but we get a complete lack of emotion. The worst thing however is that we have a really hard time believing in this scenario at all. Institutions such as these do not allow female and male fraternizations and certainly not to the level that is eventually achieved.

Even in “minimum security” as Allen eventually finds himself is very heavily regulated typically. Here, it almost seems like a borderline country club. Personally, I could have done without the whole female angle all together unless they wanted to do a completely separate story. There is more than enough male star power to put together a convincing story.

The video is in 1.78:1 widescreen presentation in 1080p resolution. The quality is actually pretty darn good. Colors are well defined and despite the limited sets (after all, most of this is inside the psychiatric facility), there is still a lot of room for detail and precise shooting. Flesh tones are accurate and this becomes a very solid track for those who like a lot of neutral colors.

For the audio portion, we get a 5.1 English TruHD track (Additional tracks include 5.1 Dolby Digital in English on the bonus DVD). The first thing I noticed was that the clarity of the dialog was spot on. There are no difficult voices to interpret, no weird flashback noises that interfere with listening to the program. Surrounds are fairly frequent and include dynamic use of all speakers even if it is just a simple door slam. Subtitles are also included in English SDH and Spanish.

This is one of those movies that I liked the premise and even appreciated many of the character performances. But ultimately it failed in its female roles as well as execution. Too many times my wife or myself were thinking out loud that this is not practical and too many times I completely forgot Olivia Wilde or Shohreh Aghdashloo were even in the picture. Ultimately, this made the movie about as average as can be. If you are a Pruitt Taylor Vince or Dash Mihok fan, I would recommend to pick this up as a curiosity. Else, this is best passed by except for those lonely nights when your Netflix queue is bare.

Michael Durr has been reviewing movies for the better part of fifteen years now. He primarily enjoys thrillers, sci-fi, animation and even a little courtroom drama. His favorite films include Escape from New York, the Goonies and anything with Alyssa Milano. When he’s not praising Kurt Russell as the greatest actor of our time or scratching his head over a David Lynch flick, he’s spending time at home in Texas with his lovely wife, Lori and his amazing son. How they put up with him is a mystery, but even Basil Rathbone doesn’t have the time to solve that one.
June/July Contest Winner’s Circle Big Trouble & The Crew + Oscar – Triple Feature