Posted in: Disc Reviews by Gino Sassani on August 6th, 2012 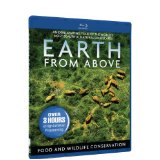 Earth From Above is a French nature documentary series dubbed into English for its American and British Blu-ray release. The host, Yann Arthus-Bertrand, garnered international attention with his renowned photography. He’s best known for his best selling coffee table book, Earth From Above, chronicling his world travels with stunning photos from a bird’s eye view. He then branched into filmmaking, using his unique aerial photographer’s eye to draw attention to world’s conservation and preservation needs. This resulted in an Earth From Above full length feature and eventually this running French series of the same name.

As a staunch environmental activist, Arthus-Bertrand formed a partnership with the United Nations Educational, Scientific, and Cultural Organization (UNESCO) and now travels the globe documenting extreme ecological changes, most of which not attributed to the now controversial subject of “climate change” and/or “global warming.” This Blu-ray release covers two discs and four programs in the series including So the Great Rivers May Live, Of Forests and Man, 6 Billion People to Feed and Do Wild Animals Still Exist? Each segment is broken into two parts and was aired as two separate episodes in the series.

“One person out of five in the world has no access to healthy water. It is one of the main causes of death.”

Yann Arthus-Bertrand travels to rivers around the world, including the Okavango River in Botswana, Africa and the Three Canyon Dam on China’s massive Yangtze river, to explore the environmental impact man is having on clean water and natural irrigation. The tranquil aerial images are contrasted by manmade natural calamities which have led to massive deforestation, rapidly growing wastelands, species extinction, and rampant disease due to the lack of fresh water. Evidently a main culprit of this watery eco-disaster our planet faces comes from the diversion of water’s natural distribution and an epidemic of pesticide poisoning the groundwater.

This episode seemed incredibly preachy and filled with enough doomsday predictions to drive one to start hoarding potable water in an underground bunker. Arthus-Bertrand attempts to show the work being done to correct the situation, but it feels unbalanced and comes across as too little too late. The stunning scenes at least revel in some of the natural splendor of Earth’s rivers while the message thoroughly disheartens you to the point of seeking out antidepressants to lift your mood.

“Tropical forests now occupy only 7% of the world.”

Wow, watching that last episode left me feeling blue for the big blue ball, y’all. Perhaps this episode exploring the great forests of the world will lift me back up.

Yann Arthus-Bertrand travels to the forests of Madagascar, Mexico, the Masoala Peninsula, Brazil, Australia, Cameroon, Canada, and France to document rampant deforestation, the exotic wood black market, Monarch butterfly migrations, loss of Lemur habitat, the last Indian tribes of the Amazon, and reversing the spread of deserts by created man-made mangrove groves. Intentionally or not, I am getting three things out of watching this series, a developing shame over the petulance known as mankind, the realization that evidently, according to Earth From Above, the only credible people taking this shit seriously are the French, and Yann Arthus-Bertrand really likes to have his face on camera as much as possible. The man has mastered the compassionate pout.

After watching, I quickly dial the suicide hotline… only a little over three more hours of this to go and I can make the pain stop.

“The farmers that feed us all represent only 2% of the population.”

Oh my gods, this is all so sad. I get angry at the filmmakers for not even attempting to find much of anything hopeful in the material. I am considering self mutilation and flagellation to fill the void of pain left on my psyche from watching the last six segments.

When I heard the above quote at the beginning of 6 Billion People to Feed, I hoped this segment would highlight those unsung agricultural heroes, the farmers. Not so much. Yann Arthus-Bertrand spends this episode examining the environmental effects of growing mass amounts of cattle, corn, grain, salt and rice to feed the endless appetite of the human race. He travels all over France and the world for a series of dry, talking head interviews with industrial farmers. Yeah, it’s about as exciting as it sounds. Once again the biggest problem is pesticide pollution. However, if you weren’t depressed enough, we travel to the Punjab in India to see how over farming strips the soil of all nutrients creating huge wastelands and then explore Borneo to witness heartbreaking unregulated deforestation of ancient trees.

After watching, I feel I should surround myself with loved ones and force them to monitor me in a suicide watch as I view the next hour and a half of segments.

“Today, one out of four mammals is threatened with extinction.”

OK, my friends removed all sharp and pointed items from my grasp. Must… cling… to… will… to… live.

In Do Wild Animals Still Exist? Arthus-Bertrand chronicles the heartbreaking plight of the elephants, sea lions, penguins, white rhinos and whales of Africa; tackles the mystery of the mass disappearance of bees and its doomsday consequences for us (spoiler: pesticides again); conducts an interview with the legendary Jane Goodall on the sad state of chimpanzees, and, in what is probably the most interesting sequence of the series, explores the wildlife boom and animal mutations in the radioactive ghost towns of Chernobyl. I found it interesting that this is one of the instances where Arthus-Bertrand didn’t actually travel in person to Chernobyl and instead sent a film crew to capture b-roll footage. Evidently, danger is not exactly Yann’s middle name.

Earth From Above released as a MPEG-4 AVC encoded Blu-ray presented in its original aspect ratio of 1.78:1. The video suffers mainly from the obviously industrial, but not top-of-the-line, digital cameras capturing the source footage. There are some segments which fall on the soft side, and it appears they utilized different, lesser quality cameras, but for the most part the image quality of the nature scenes remains very pleasing to the eye. Colors stay rich and saturated throughout, and the fine detail is appropriate for hi-def. Issues of digital artifacting, aliasing and shimmer occasionally happen during aerial shots composed of complex and “busy” topographies, but for the most part the end product is clean.

Here is a case where lossless audio would have been a much better choice than the standard Dolby Digital 2.0 mix presented on this Blu-ray release. Armand Amar’s evocative score demands more audio loving care than given here, considering the sheer amount of ethnic sounds and influences present in his world music rich soundtrack. There are many scenes with exotic exterior ambiences which beg for at least a 5.1 mix. Unfortunately most of the audio is driven by front and center speakers resulting in an overall non-immersive surround mix. Arthus-Bertrand’s on screen French is overdubbed by an elegant, male British voice-over, and the majority of the episodes are narrated with sophistication by a quietly dramatic British female narrator. The dialog is all clearly captured, and the music/sound FX never overpowers the dialog. Fidelity is decent overall, if narrow in scope. This flat mix is simply due to a lack of creative vision in the audio engineering.

There were no special features included with these releases.

Although I can’t deny the facts presented here, after watching, I believe this series is named Earth From Above because it comes across so damn condescending. Unlike the far superior nature docu-series like Planet Earth, Life and Human Planet, where you never see the voiceover hosts and they let the exotic lands and wildlife captured on film tell the story with limited narrative, Arthus-Bertrand’s face shares about equal time on camera as the admittedly captivating scenes of nature. Between endless talking head interviews focusing on Arthus-Bertrand’s compassionate listening expressions and the ubiquitous helicopter shots of him talking with a large microphone dangling in front of his mouth, I found myself longing for the sequences not involving him. If you are looking for a total downer nature experience check out Earth From Above; just don’t be tempted to jump.

“The Earth is art; the photographer is only a witness.”

Gino Sassani is a member of the Southeastern Film Critic's Association (SEFCA). He is a film and television critic based in Tampa, Florida. He's also the Senior Editor here at Upcomingdiscs. Gino started reviewing films in the early 1990's as a segment of his local television show Focus. He's an award-winning recording artist for Omega Records. Gino is currently working on his 8th album Merchants & Mercenaries. Gino took over Upcomingdiscs Dec 1, 2008. He works out of a home theater he calls The Reel World. Favorite films: The Godfather, The Godfather Part II, The Body Snatcher (Val Lewton film with Karloff and Lugosi, not the pod people film), Unforgiven, Gladiator, The Lion King, Jaws, Son Of Frankenstein, The Good, The Bad And The Ugly, and Monsters, Inc.
Age of the Dragons Marvel Anime: Wolverine – Complete Series