Posted in: No Huddle by Brent Lorentson on September 7th, 2012 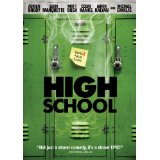 It’s not every day you get the chance to say the quote above and apply it with conviction.  But when you watch High School or any other “stoner” movie, you simply have to view them through smoke-filled glasses or the viewing experience will be in vain.  Kind of like watching The Rocky Horror Picture Show, as a movie it’s bad, but when you see it with a live performing act it becomes a completely new experience.  Now I’m not advocating that everyone light up before every movie, but to understand that some films ask their viewers to sometimes step outside their comfort zone.

When we first meet Henry Burke (Matt Bush) he is well on his way to going to MIT and being valedictorian at his high school with only his finals standing in his way.  He’s your brainy kid that doesn’t ever get into trouble, so when the morning comes he has an auto collision in the school parking lot with the principal (The Shield’s Michael Chiklis) of his school, he also manages to find his way into detention.  Henry holds the school’s resident pothead, Travis (Sean Marquette) responsible to help pay for the damages since it was his car Henry was trying to avoid hitting in the first place.  It’s later we discover before going to high school Henry and Travis used to be best friends, but as they got older their paths in life took them in separate directions.

It’s this point where the film takes a cliché plot device but still manages to connect with the audience, because we’ve all been there.  Maybe not exactly like these guys, but we’ve all gone through that transition where we’ve managed to drift away from friends we at one point thought would always be there.  Perhaps a little more heart in this story could have elevated this film, but this film embraces what it is, a fun pot movie, and that’s fine by me.

As the film moves along and the guys are reliving the early years, Travis offers Henry a chance to get high for the first time, and after a little prodding he takes his first glorious hit.  Unfortunately for Travis he discovers that the principal is planning a drug test of the whole school to ensure that all their students are drug free, and those who fail the test should expect expulsion.

With no other options, the boys decide the only rational thing to do since they can’t pass the drug test is to ensure the whole school fails the drug test.  It just so happens the school is planning a bake sale the day of the testing so the plan is simple, swap out the brownies with laced brownies.  And just where do the guys find enough pot to get a whole school high?  Well, they simply steal it from the friendly neighborhood drug dealer, Psycho Ed (Adrien Brody) of course.  I’m not the biggest fan of Brody, he’s hit or miss for me, but in this role I couldn’t help but smile and have fits of laughter when he was on screen.  His conversations with his frog are enough to get me to forget some of the films minor flaws.

Once the swap-out is made with the brownies, the real fun begins with this film.  Because it’s not just pot that’s in these brownies, but a super hybrid that manages to only get you higher as time progresses.  Many of the film’s high points (sorry, had to inject a little pun) follow the reactions of the students as the drugs are kicking in, most notably a student that roams the school trying to turn an attendance sheet to the main office.

The other notable entry is Colin Hanks as the school’s assistant principal, Brandon Ellis.  When Brody isn’t stealing scenes as the drugged up Psycho Ed, it is Hanks that is so much fun to watch as he falls deeper under the spell of the magic brownies.  Maybe it’s just me, but after watching this I couldn’t help but imagine a sequel to Bachelor Party with Tom Hanks setting up a party for his son Colin; this is a sequel that needs to happen.

There really isn’t much to dislike with this film, and honestly for what it is I feel it’s one of the better installments to the sub-genre.  But what I do dislike is seeing how Chiklis decided to play the controlling principal, using some weird accent and a bad hairpiece.   He’s so non- threatening here that the character is hard to take seriously.  This is strange, because anyone who’s seen Chiklis in the role of Vic Mackey knows how scary he can be.  But when that’s my only complaint, that’s a good thing.  I wouldn’t say it’s a classic either, but it’s a good time, and with this kind of film that’s all you need.  So sit back, light’em if you got’em, and enjoy.

Brent Lorentson is a horror writer and film critic based out of Tampa, Florida. With a BA in Digital Film, he co-wrote and co-directed Scavenger Hunt. His short stories have appeared in various horror anthologies. In 2019 his short script Fertile Blood will be a part of the anthology horror film Slumber Party. He is currently working on his first novel A Dark and Secret Place set to be released in late 2019. Favorite Films: Taxi Driver, Fight Club, I Saw the Devil, The Wild Bunch, Dawn of the Dead, A Clockwork Orange, Pulp Fiction, Heathers, The Monster Squad, and High Fidelity.
The Adventures of the Wilderness Family Criminal Minds: The Seventh Season