The Adventures of the Wilderness Family

Posted in: No Huddle by Brent Lorentson on September 7th, 2012 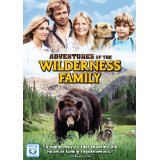 Watching this film is like unearthing a time capsule, not just to another time, but what seems like another world.  It’s crazy to see how much has changed since this film’s original theatrical release back in 1975.  One moment that stuck out in particular: when they are driving along the streets of Los Angeles you might notice a sign at a gas station posting gas at 56 cents a gallon.  This is a family that is already sick of life in the big city.  I can only imagine how they would react to big city life now; would they run further into the hills or simply accept the advances in modern technology?

The family initially makes the decision to leave the city life behind for the sake of their sickly daughter.  Skip (Robert Logan) is tired of his job and fed up with the stresses of the city, so in the car returning from a visit to the doctor he asks his wife Pat (Susan Damante) what she’d think about moving out and into the country.  This is something the two of them had always talked about when they first got together, but having kids and jobs seemed to put these dreams on the back burner.  But with the health of their daughter being their biggest concern, the family sells everything they own and purchases some property in a remote area in the Rocky Mountains.

Once out to the property, the family has to take shelter in what remains of a decrepit cabin till they can build a new home for them to live in.  Cue the montage of the family at work building their new home.  It’s hard to take a lot of this idealized way of life seriously, but maybe that’s the problem, that with advances in technology we’ve just grown too cynical and out of touch.

As the film goes on and the family becomes more in tune with nature, the dangers of the mountain life are presented to the Robinson family.  It’s not just the weather they must contend with, but mountain lions, bears, and wolves.  Thankfully the family has a dog with them that manages to get them out of every dangerous scrap they find themselves in.  On several occasions I was ready to throw in the towel, for any hope that the dog would manage to survive this movie.  I’ve heard cats have nine lives, but this yellow lab must have a few lives of its own on reserve.  This dog makes Rin Tin Tin and Lassie look lazy in comparison.

Apparently this is the first film of three that was made about this nature-loving family.  I vaguely remember watching this growing up, and to be honest I quite enjoyed this.   I couldn’t help but be a little jealous of the kids in this that got to play with bear cubs and mountain lion cubs.  This is the time before everything was CGI, so when a character has to wrestle a mountain lion we are really seeing a guy wrestle with a mountain lion.  Maybe it’s my inner child talking here, but I loved seeing these real interactions with the animals, and seeing a couple of bears go head to head had me smiling.  Don’t get me wrong, this is not The Grey, this is a kids’ film, so the violence is tame and there is little to no blood here.

Overall if you love nature and wildlife, or if you have kids who do, then this is the movie for them.  This is one of those films for everyone, and it’s obvious they just don’t make family films like they used to.  Get the family together (this includes pets), make some s’mores and enjoy this little film.

Brent Lorentson is a horror writer and film critic based out of Tampa, Florida. With a BA in Digital Film, he co-wrote and co-directed Scavenger Hunt. His short stories have appeared in various horror anthologies. In 2019 his short script Fertile Blood will be a part of the anthology horror film Slumber Party. He is currently working on his first novel A Dark and Secret Place set to be released in late 2019. Favorite Films: Taxi Driver, Fight Club, I Saw the Devil, The Wild Bunch, Dawn of the Dead, A Clockwork Orange, Pulp Fiction, Heathers, The Monster Squad, and High Fidelity.
2 Broke Girls – The Complete First Season (Blu-ray) High School