Posted in: Disc Reviews by Gino Sassani on September 7th, 2012 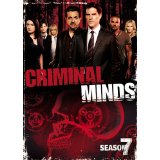 Enter Agent Rossi (Mantegna) who is actually one of the unit’s founding fathers. Agent Hotchner (Gibson) is the often stoic agent in charge who defers to Rossi’s judgment most of the time. The team also includes young Dr. Reid (Gubler) who is a genius but lacks the necessary skills to have much of a social life. Agent Morgan (Moore) is the dynamic soul of the team, possessing an unending supply of energy to drive their investigations. JJ (Cook) returns as the public face of the team, handling liaison duties with local law enforcement and also the team’s press relations. In a command center that rivals the bridge of the Enterprise is Agent Garcia (Vangsness) who handles the computer research while the rest of the team is in the field. Together they travel to hot spots throughout the country to help local cops and feds with hard to capture UnSubs (what the team calls the criminal, and means Unknown Subject).

Season seven gives us the chance to really peek behind the lives of the team like we might not have seen before. It begins by picking up on the cliffhanger where Prentiss was supposed to have been killed. When she actually shows up alive, there are going to be some hurt feelings. Reid carries them perhaps the strongest. We learn that Rossi has had three ex-wives, and now one of them has come to him to ask a difficult favor. She’s discovered she has ALS and wants Rossi to help her end her life. It’s one of the best emotional performances from that character since he joined the show. JJ is also back, and her return brings its own tragic moments. She does get the more uplifting story arc as she finally gets married as the season ends. Morgan’s family life comes into view when his cousin is kidnapped. She appears to have fallen in love with her abductor.

Some of the stories are as compelling as ever. True Genius deals with an unsub in San Francisco who is using the old Zodiac Killer MO. Of course, those crimes were never solved, so there’s always going to be a question of the original killer being back in action. Heathridge Manor is a deliciously gothic horror tale complete with haunted house. A guy sews young women into clothes that have poison in them. Juliet Landau from Buffy and Angel guest stars as a ghost/vision in this creepy little tale. It’s the best of the season by far.

Each episode of Criminal Minds is presented in a 1.78:1 aspect ratio. This is a nice transfer that seems to work almost all the way around. Colors are near perfect reference, particularly flesh tones. Black levels are nicely rendered, adding a depth of detail to the darker scenes. It is actually some of the better-lit daylight scenes which show the most serious flaws. Lighting often looks harsh and becomes very grainy and broken up. It is here that I believe you’ll find the strongest hints of compression artifact. This doesn’t happen all the time, but quite a few exterior shots display this unfortunate blemish on an otherwise excellent picture.

The Dolby Digital 5.1 track works. The film utilizes the common trend of using music to work a few montage images into the story. The music is not merely stereo mixes thrown into the bunch, but decent 5.1 mixes in their own right. Dialog, which is essentially the entire show, is always up front and center where you’re sure to catch every word.

Deleted Scenes: Some of the episodes give you added footage. Nothing earthshaking here, but always a welcome addition.

There are Production Diaries called Mind’s Eye that run 5-10 minutes each on several episodes.

Fireside Chat With Gray Gubler: (4:04) This is a spoof of the Masterpiece Theater formula with Gubler on Heathridge Manor.

Wedding Toasts: (4:55) The actors in character toast JJ for her wedding.

Seven Stories: (28:16) Cast and crew take a closer look at seven of the season’s best episodes.

The series continues the dark and character-driven stories that made the previous season such a stand-out. While the basic formula remains and the show continues to feature some of the most bizarre cases on television, it has really started to delve into the past problems of the cast of characters. You’d think by now they’d have run out of cool ideas. That’s certainly not the case, and the 7th season certainly proves the show isn’t running out of steam.  It’s evolving and only getting better. I wish they’d stop playing the cast leaving-or-not games. But it’s a strong collection of stories, to be sure. Season 8 is about to begin, and if this release is any indication of where the show is going, “it’s gonna be a great season”.

Gino Sassani is a member of the Southeastern Film Critic's Association (SEFCA). He is a film and television critic based in Tampa, Florida. He's also the Senior Editor here at Upcomingdiscs. Gino started reviewing films in the early 1990's as a segment of his local television show Focus. He's an award-winning recording artist for Omega Records. Gino is currently working on his 8th album Merchants & Mercenaries. Gino took over Upcomingdiscs Dec 1, 2008. He works out of a home theater he calls The Reel World. Favorite films: The Godfather, The Godfather Part II, The Body Snatcher (Val Lewton film with Karloff and Lugosi, not the pod people film), Unforgiven, Gladiator, The Lion King, Jaws, Son Of Frankenstein, The Good, The Bad And The Ugly, and Monsters, Inc.
High School Piranha 3DD (Blu-ray 3D)